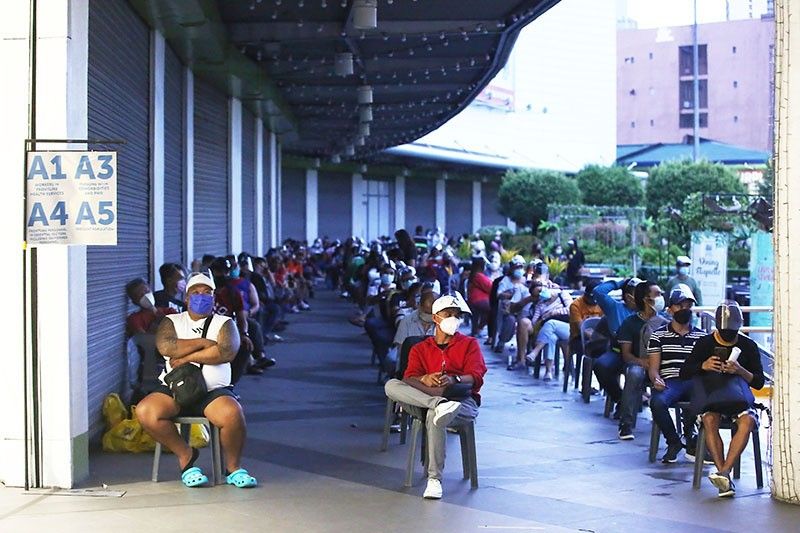 MANILA, Philippines — With the progress of the ongoing vaccination efforts, the Metropolitan Manila Development Authority said it was confident that Metro Manila can achieve "population protection" against the COVID-19 virus early.

The government now favors "population protection" as a target since herd immunity, which would require vaccinating at least 70% of an area's population, "has a lot of attached criteria," the health department said in May.

In a statement, MMDA chairman Benhur Abalos called the vaccination numbers in the capital region "encouraging," citing data based on daily reports of the region's 17 local government units.

"If the jab numbers are sustained and further increase, with a steady supply of vaccines, we can have the majority of Metro Manila’s population protected by end of September this year or hopefully earlier,” said Abalos.

Metro Manila posts an average of 114,000 jabs a day at present with a "steady supply" of coronavirus jabs still on the way, he added.

As of June 22, around 3.6 million of Metro Manila’s population of about 14 million have been vaccinated. Of which:

"Given our daily average jabs, we will be having at least 3.4 million jabs per month. Therefore, the remaining 10.3 million jabs can be attained in three months or less.”

Experts say the Philippines is still years away from achieving 70 million vaccinated citizens, which is the criteria for herd immunity.

The Department of Health earlier readjusted its original target to achieving “population protection” against COVID-19 instead.

Excess vaccines to the Metro?

"They have increased their vaccination capacities and even doubled or tripled their jabbing capacity per day with the help of the private sector," he said.

In a separate interview aired over ABS-CBN News Channel, Abalos also pointed out that urban centers where there are international airports should still be protected to stop the spread of the Delta variant anywhere else in the Philippines.

He said the region should be allotted excess vaccines after an "equal" distribution across the country.

"We must help those surges. It is only but Christian and natural that we help our brothers who really need these vaccines. But once we make this computation, if there's still extra, we should prioritize Metro Manila," he said.

Per Our World in Data, the Philippines is among the worst countries in the world when it comes to vaccine per population.

In a statement, the Commission on Human Rights lauded the government's "no wrong door" policy in its vaccination program.

"The best defense we have under these circumstances is to keep up our vaccination efforts and ensure continued compliance with basic health protocols," it said.

"This policy allows Filipinos to be inoculated anywhere in the country and is seen help speed up efforts and ensure that that there remains ample allocation of #Vaccine4All."

To date, the DOH has recorded 1.37 million coronavirus infections in the Philippines, 49,862 of whom are still active cases.

The CHR in its statement also took "great solace" in the government's deferment of the suggestion to segregate vaccinated and non-vaccinated individuals.

"While more needs to be done to curb the spread of the virus, enacting policies that segregate the vaccinated from unvaccinated individuals may be prone to abuse and discrimination," it said.

"We agree that further discussions and study needs to be done for future policies to protect general populations."

— with a report from Xave Gregorio

LGUs urged to implement protocols for vax drive amid floods

Losing happens even to the best of ‘em, Ramirez tells athletes