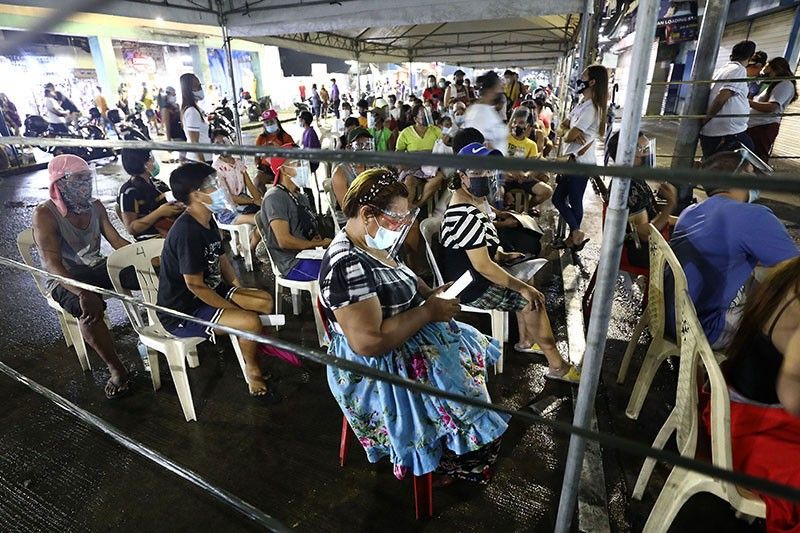 Vendors, delivery drivers and others who work at the night market in Divisoria, Manila wait for their turn to be inoculated with the COVID-19 vaccine on July 5, 2021 as the local government starts their night vaccination program which will cater to individuals who cannot go to inoculation sites during daytime. (The STAR/Miguel de Guzman, file)

MANILA, Philippines — Another wave of COVID-19 infections caused by more transmissible variants is a “big possibility” so measures to prevent the further spread of the virus should be sustained, the Department of Health (DOH) said.

During a meeting of the government’s pandemic task force last Tuesday, President Duterte asked Health Secretary Francisco Duque III whether COVID-19 variants like Alpha, Beta and Delta could create another wave of infection.

“It’s a big possibility… Although another spike in cases may be driven not just by the variants but also by increasing mobility of people, the reduced or poor compliance (with) our minimum public health standards like not wearing of face masks and face shields and not observing physical distancing,” Duque said.

“So there are many possible causes of a third wave or succeeding waves.

So we have to really implement our PDITR (prevention, detection, isolation, treatment, reintegration) strategy, plus vaccination, to be able to keep our cases down and manage them while we are safely opening up the economy,” he said.

Duque noted that handling the pandemic involves a balancing act between health and the economy.

During the meeting, Duque reported that out of the 6,566 samples with lineages, 19 tested positive for the Delta variant first detected in India.

He said 21.1 percent of all the specimens were infected with the Beta variant first reported in South Africa, making it the most common variant.

The Alpha variant, first detected in the United Kingdom, was found in 18.5 percent of the specimens while Gamma, formerly known as the Brazilian variant, was found in two samples.

Duque said the Lambda variant, which is spreading in Peru and more than 30 countries in South America, has not yet been detected in the Philippines.

“But one notable feature of this variant is it has similarity with the Delta variant. It is possible that it is a more transmissible variant and it can affect the effectiveness of vaccines but it is still being studied,” he said.

Asked by Duterte whether the Philippines should close its borders if there is a virus outbreak, Duque said “It is a possibility.”

“Well, right now, our border control, our national protocol, which you have approved for the whole country, is the ten-day facility quarantine, test on the seventh day and completion of the remaining four days in the LGU (local government unit) of residence,” he said.

“So by and large, we have been effective in preventing the introduction of the Delta variant into households and into communities… and we hope to keep it that way,” he added.

The Philippine Genome Center (PGC) yesterday called on local government units (LGUs) in areas where there are surges of COVID-19 cases to send swab samples so they can evaluate the variants circulating in their communities.

At a public briefing, PGC executive director Cynthia Saloma said they want to do more genomic sequencing of positive swab samples from localities that are experiencing surges in COVID-19 cases.

But currently, she noted the samples that PGC is getting come primarily from those sent by Regional Epidemiology and Surveillance Units of the Department of Health.

“We are doing genomic biosurveillance because we want to know the circulating variant in a certain place, particularly in areas where there are surges. We really encourage the LGUs to send samples to us,” she added.

The PGC’s sequencing machine has the capacity to process 750 samples per run. However, only samples with high viral loads are qualified to be sequenced.

Saloma said the PGC has not sequenced any case of Lambda variant which remains to be considered as “variant of interest” by the World Health Organization.

However, there are initial reports that the new variant has the tendency of increased transmissibility and can cause immune evasion.

“But everything is still being studied. They are looking if additional data on the ground, as well as experiment in the laboratories, will support it (Lambda variant) being elevated to ‘variant of concern’ (classification),” she added.

Saloma is also recommending that a person infected with a COVID-19 strain considered as variant of concern be placed in a quarantine facility.

“If a patient with variant of concern is placed in a house, most likely the other members of the family will also get infected,” she added, asking all LGUs that have the capacity to trace contacts of patients who contracted the variant of concern. — Sheila Crisostomo, Alexis Romero

FACE-TO-FACE CLASSES. Learners of the Hiyang-Hiyang Elementary School in Cadiz City, Negros Occidental during one …