DILG: Select firefighters to be armed for crowd control, self-defense only

DILG: Select firefighters to be armed for crowd control, self-defense only 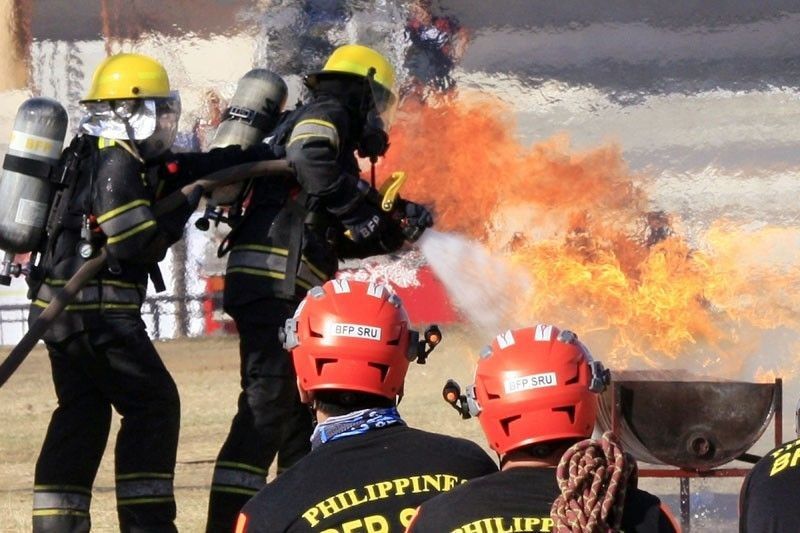 MANILA, Philippines — The Department of the Interior and Local Government defended Sunday the provision in the recently-signed Bureau of Fire Protection Modernization Act that will create a Security and Protection Unit in each regional and city fire station.

President Rodrigo Duterte signed the bill to modernize the fire protection bureau on Friday at a ceremony in Malacañang. The bill includes a provision allowing 2,282 firefighters to be armed.

CHR warns arming firefighters ‘might cause more harm than good’

In a statement sent to reporters, Interior Spokesperson Jonathan Malaya said that fire officers will be armed with pistols "for them to be able to maintain peace and order during fire incidents and for self-defense purposes as fire victims, out of frustration, sometimes gang up on fire personnel during firefighting operations."

"There are times when people want to save their burning house first, they crowd the firefighters and make a fuss. We also want people to protect and follow our firefighters as they do their job," he said.

Guns only 'to ward off threats'

The Commission on Human Rights also said that the proposal to arm firefighters "may only cause more harm than good."

Senators initially resisted the provision but were eventually outvoted by Duterte's allies in Congress.

But Sen. Ronald dela Rosa, who sponsored the bill in the upper chamber, told senators that creating a Security and Protection Unit of the BFP in each city and municipality would serve to protect firefighters when faced with "unruly" people while on duty.

Duterte himself justified arming firefighters as he signed the bill, saying that giving them guns would "really be just to ward off threats and destruction of government properties."

Malaya on Sunday held a similar tone, saying that firefighters would undergo marksmanship and gun safety training before the issuance of their firearms.

"We will not just arm them without proper training," he said.

"It was only when the BFP was created under the DILG that they no longer were issued firearms,” he said.

"We must remember that the BFP also does law enforcement functions because they enforce the Fire Code so they already have some experience in this regard," Malaya said.

"The BFP can help ensure public safety and peace and order, as a support to the PNP, but of course, their primary responsibility is still fire and rescue that is why only 2,282 of them will be armed."

In an earlier study, researchers from non-profit Saferworlds said that sources from inside the Duterte administration have observed "a lack of diverse perspectives in peace and security policy circles and an absence of debate on policy direction" when it came to the "military-first approach."

"Through the dramatic militarisation of civilian governance structures, President Duterte has weaponized counter-terrorism to pursue a narrow, securitized political agenda that is having widespread impacts on peace and human rights," the paper read.

Interior Secretary Eduardo Año also said that the measure would “significantly improve the country’s fire prevention, rescue and emergency medical services through its expanded role and the acquisition of modern equipment, facilities and capacity enhancement of all fire personnel.”

“This will allow the bureau to fully modernize its fire-fighting tools and lifesaving equipment and professionalize the fire personnel and fire services,” he said.

Under the new law, the BFP will take on an expanded role that includes responding to natural and man-made disasters, perform rescue operations, provide emergency medical services, and handle the containment of hazardous materials.

Among the proposed modern firefighting equipment to be acquired are fireboats for low-lying and coastal areas, helicopters for emergencies that cannot be reached by land vehicles; rescue and hazard material trucks, and other emergency vehicles and equipment.

Procurement will be done together with the mandated training and hiring of additional BFP personnel and construction of more fire stations nationwide.

Under the BFP Modernization Act, each Security and Protection Unit shall be composed of at least 14 personnel with two team leaders with the rank of at least Fire Inspector and team members, who shall undergo a neuropsychological examination and periodic training.

"The SPU shall be provided with appropriate equipment to protect firefighters during fire suppression, containment of HAZMAT and CBRNE materials, fire investigation, and in the performance of all other acts pertinent to their mandate," the interior chief said.

Malaya stated that fire officers are capable of handling such situations given their training so a special unit to ensure their safety and protection is an essential part of enhancing the capabilities of the modernized BFP.