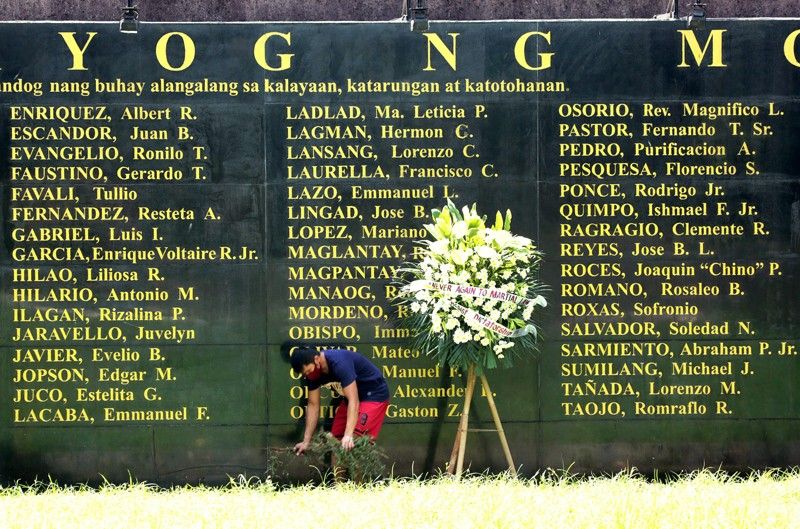 MANILA, Philippines — President Rodrigo Duterte was a key figure in the Marcos family's return to power in recent years, beginning with his "whitewashing" of the crimes, corruption, and human rights abuse during the Martial Law era of ousted dictator Ferdinand Marcos, groups said Tuesday.

In a statement, the Asia Pacific Research Network, a collective of research and advocacy NGOs, pointed to Duterte's repeated expressions of support for the Marcos family, which the group said only "lent them further political capital."

No, it is not unconstitutional to say ‘never again’ to Marcos atrocities

"Despite massive literature and verifiable sources on the Marcos atrocities, Duterte has helped the dictator’s family to peddle a different version of history," APRN Acting general-secretary Mara Medrano said.

Ateneo de Manila University in another statement said there were "actors…now back in the spotlight, working hard to blatantly revise history."

"This is now one of our biggest challenges: to make sure that we, as a nation, will never forget…Together, we need to keep the memory of Martial Law so that we won't make those same mistakes again,” the university said.

Sen. Imee Marcos is chair of three Senate panels, including the Committee on Electoral Reforms and People’s Participation. Former Sen. Bongbong Marcos has confirmed that he is eyeing a national post next year, after losing by a slim margin to Vice President Leni Robredo in 2016.

The Marcos family has repeatedly told the public to "move on" from the Martial Law era, with Bongbong even suggesting that school textbooks touching on the abuses of the Marcos dictatorship be revised.

All the while, disinformation on the supposed "golden days" under the Marcos administration and denials of human rights abuse at the time continue to spread on social media.

Despite many in government, civil society, the academe, and international NGOs recognizing Martial Law as one of the darkest chapters in Philippine history, Duterte has praised the measure and has often threatened to declare it nationwide.

He has also not been shy about his ties with the Marcos family.

In 2016, Duterte ordered the remains of the late dictator buried at the Libingan ng mga Bayani.

The Sandiganbayan has since found family matriarch Imelda Marcos guilty of seven counts of graft for creating private foundations in Switzerland when she was a government official.

Despite the conviction, she remains free while the case is under appeal, which the Campaign Against the Return of the Marcoses and Martial Law (CARMMA) called "a clear testament to the strong ties the Marcoses have been able to forge with the Duterte regime."

"Claims by Marcos-led propaganda machinery are spreading the blatant lie that the Marcoses and their cronies have no ill-gotten wealth, that there were no human rights violations, and that the economy was at its best during the Marcos era. This persistent revision of our nation's history lays bare the Marcos' goal: to regain power and seat in Malacanang," the group said in its own statement.

READ: Whatever happened to: Graft conviction of Imelda Marcos

'Cut from the same cloth'

Duterte and Marcos share a number of similarities, too, behind the chief executive's "rose-tinted depiction" of the late strongman, the groups said.

In a separate statement, the Council for People’s Development and Governance (CPDG) pointed out that both state leaders have both pursued militaristic policies under the guise of saving the country from communism and crime.

As a result of both campaigns, legal dissent in the Philippines — from lawyers, journalists, and activists — is maligned as destabilizing efforts from left-leaning quarters.

"The persisting insurgency is not simply war or a plot to overthrow the government. It is a product of growing, seemingly endless inequalities felt among the poor, deprived, and marginalized," Maza, who was lead convenor of the National Anti-Poverty Commission early in the Duterte administration, said.

She said that the insurgency "is the language of those who cannot speak and those disillusioned with speech."

Global rights watchdog Amnesty International recorded an estimate of 70,000 incarcerated individuals, 34,000 torture victims and 3,240 murdered Filipinos by state forces in the 21 years that Ferdinand Marcos was in power.

Under the Duterte administration, government has focused on the illegal drugs and the communist insurgency.

Academics and rights organizations have pointed to the "dramatic militarization of civilian governance structures" that have led to heavy security-focused measures. The administration's "war on drugs" has yielded some 6,100 killed in official police operations according to government data, but rights groups say the number may be as high as 30,000.

The CPDG also said that the current regime is like Marcos' because of "billions worth of funds that have been misappropriated and misused." APRN said that Duterte has "kept cronyism and patronage politics alive under his administration."

"In its five years in power, the Duterte regime is seen to be following in the mold of the dictator Marcos — its dependence on military rule, increasing corruption, the gagging of critical media, and the widespread human rights violations," CARMMA said.

"The Philippines [after] Marcos is in fact far from golden. We have to remember that even truth-seeking and journalism have also become dangerous jobs under the late ousted dictator. It was Marcos who authorized the military takeover of major media outlets and the mass arrest of journalists, editors and media workers," APRN also said.

"Today, we not only remember the 1972 martial law declaration but we support the Filipino people in their fight against another dictatorship."

Philstar.com NewsLab: 31 YEARS OF AMNESIA: Stories on the myths that made Marcos

2021-09-21
AtinitoAdmin
Share
Previous Grabfood expands to 3 provinces
Next How to teach kids to be Internet responsible: Google shares tips