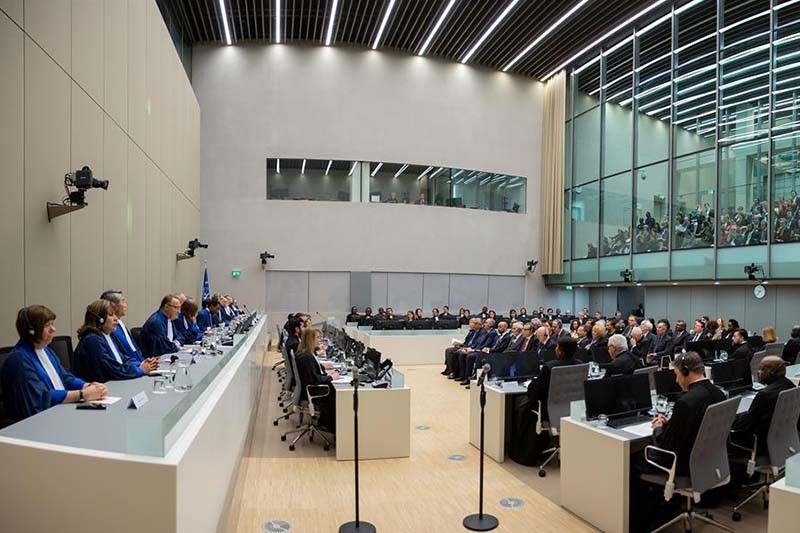 MANILA, Philippines — The government won't allow International Criminal Court investigators into the Philippines to look into the killings tied to President Rodrigo Duterte's "drug war" because only local authorities can probe crimes that happened in the country, Malacañang said Monday.

Presidential spokesman Harry Roque said the exercise of jurisdiction and sovereignty is exclusive to the Philippines and the country no longer has the obligation to cooperate with the ICC.

Ex-ICC judge: Probers can get evidence on killings even if barred from Philippines

"No, because we are a free and a sovereign country. Because of the sovereignty and jurisdiction…only the Philippines can investigate the crimes that happened within its territory now that we are no longer part of the Rome Statute of the ICC," Roque said at a press briefing.

In 2019, after a Chinese vessel hit a Filipino fishing boat in the Recto Bank in the West Philippine Sea, the Palace said it "welcomes and accepts the offer of the Chinese Government to conduct a joint investigation to determine what really transpired in Recto Bank and find a satisfactory closure to this episode."

Last week, an ICC pre-trial chamber permitted the conduct of a probe on the complaints filed against President Duterte, saying there is "reasonable basis" to proceed with an investigation.

RELATED:Despite everything, Panelo insists on publication rule for ICC treaty

Government officials have downplayed the ICC's decision, insisting that the court has no jurisdiction over the "drug war" because the Philippines has already withdrawn its ratification of the Rome Statute, the treaty that created the ICC.

They also argued that the local courts are working so there is no need for a foreign entity to be involved in the issue.

The Duterte administration has found an ally in former senator Juan Ponce Enrile, who said ICC probers should be barred from entering the country. The former senator also recommended that the ICC investigators be declared persona non grata.

Asked to react to Enrile's suggestion, Roque said the question was "moot and academic."

"Well, many thanks to former Senate President Enrile. He is really full of wisdom. But the stand of the Philippines is we are no longer part of the Rome Statute of the International Criminal Court, we no longer have the obligation to cooperate," the Palace spokesman said.

"Now, that is a moot and academic question because while COVID is here, no one can come here except those with long staying visas," he added.

Roque said it would take a long time before an arrest warrant is issued, citing the work load of ICC prosecutors.

"I think it would take a very long process before the warrant of arrest is issued assuming that the court would issue one. If you look at the caseload of a prosecutor, a case subject for preliminary investigation really takes years especially if there is no cooperation from the state," Roque said.

"The case may languish 'til kingdom come," he added.

Roque advised those whose rights were violated to file complaints before local police or prosecutors.

"The process here is faster because for our prosecutors, it's just 90 days. If they do not resolve, they won't receive salaries," he added.

DOTr to recommend increasing PUV capacity in Metro Manila to 100%

Robredo on vote buying: Take the money, but vote according to conscience

Kasambahays ask Robredo: Are you angry at Bongbong?

Rogers family drama: What to know and why you should care

The family drama surrounding Rogers Communications Inc. could have ripple effects for the company and …