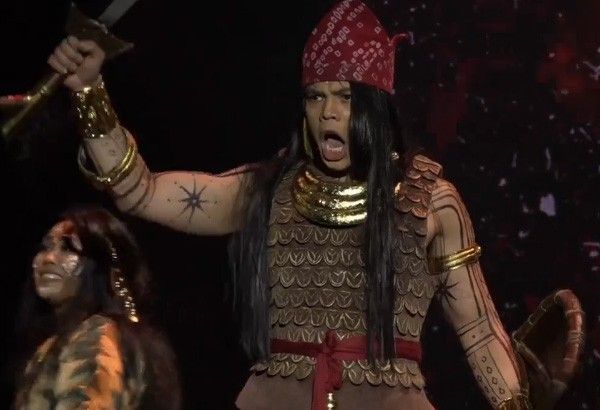 After being closed for 25 years, the Metropolitan Theater is finally open with a new look! And restored, albeit in stages, to its 1931 glory with all the technological advances of the 21st century.

For starters, the original design by Juan Arellano is given a rebirth, including a restoration work of National Artist Fernando Amorsolo's grand murals, as well as the original paintings and fixture such as the sculptures and reliefs by Francesco Monti, and the Met's ceiling mural by Val Tampinco that will resurrect its former Art Deco glory.

The restoration work also comes with a state-of-the-art Dolby sound facility that's only eclipsed by the Marina Bay Sands Theater in Singapore.

Celebrating this rebirth is the staging of an original Filipino musical based on the life of the Philippines' first freedom fighter – "Lapu-Lapu: Ang Datu ng Mactan"!

"The National Commission for Culture and the Arts (NCCA) purchased the Metropolitan Theater in 2015 and acquired it from the GSIS' inventory of public domain properties with the purpose to conserve it, in cooperation with the National Historical Institute (NHI).

"The heroism, gallantry, and nobleness of our forefathers 500 years ago is adapted by librettist Atty. Nick Pichay in a modern take of the Battle of Mactan. The musical soars high with the legacy it brings," enthused NCCA's executive director and officer-in-charge Marichu Tellano.

From page to stage, the individual virtual rehearsals of the cast took three months before the company gathered to complete the group rehearsals in just 12 days! The ensemble includes Andre Tiangco (as Ferdinand Magellan), Al Gatmaitan (as Pigafetta), Natasha Cabrera (as the Babaylan), Cara Barredo (as Reyna Juana) and Arman Ferrer (as Lapu-Lapu). Playwright Nick Pichay said he combined myth, mystery, memory and history to come up with the libretto.

"We are formally raising the curtains of the iconic and partially-restored Metropolitan Theater. This was supposed to be opened last April 27 but we were not allowed to have an audience by the IATF due to the pandemic. The performance that night was so great but the theater was empty; it brought me to tears.

"This is a Broadway-caliber production, directed by Dexter Santos, and I'd like to tour it abroad," intoned NCCA chairman Arsenio Lizaso.

Catch "Lapu-Lapu: Ang Datu ng Mactan" on its virtual premiere on October 24 that will be live-streamed free on the Metropolitan Theater's social media account at 6 p.m. Other streaming dates on the Ktx.ph, TFC, and iWantTV platforms will be announced thereafter.

"The country is experiencing feelings of hopelessness, and this project hopes to reverse that. After all, the theme of the quincentennial is victory! Unity, and inter-agency cooperation, made the completion of this restoration project possible; just like how Lapu-Lapu won the Battle of Mactan. There's new air-conditioning systems, state-of-the-art audio facilities, and comfortable seating arrangements. We hope the full restoration will be completed before the end of the current administration," intimated NHI chairman Dr. Rene Escalate.

The Metropolitan Theater received the national historical marker in 1978, and was named a "national cultural treasure" in 2010.