‘Sana all’: Couple celebrates 70 years of marriage amid pandemic

‘Sana all’: Couple celebrates 70 years of marriage amid pandemic 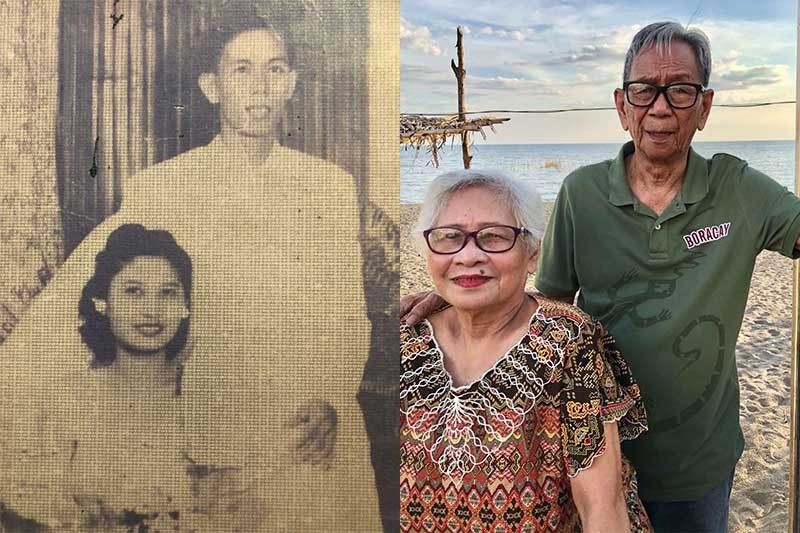 MANILA, Philippines — In modern times, it’s difficult to find a love story that rivals those in movie scenes.

Breakups left and right, divorces here and there, sometimes it becomes grueling to find a glimmer of hope that love truly lasts a lifetime.

But Jose “Piping” and Raymunda “Diding” Ortega, who celebrate their 70th year of marriage, are a shining beacon to what a partnership can become when you’re with the right person.

And since then, they have raised nine children, seven daughters and two sons — all have grown up to be successful on their own. Piping and Diding with their nine children in 1965

Philstar.com sat down with members of the Ortega family to find out just how the couple have stood strong all these years.

A partnership tried and tested by time

A relationship has many ups and downs, and one that has lasted seven decades is abundant with them.

While the idea of “happy ever after” sounds enticing, it is sometimes not a reality.

The same can be said for Piping and Diding who have had a number of difficulties of their own; after all, a lower middle class family raising nine children isn’t easy.

But according to their eldest daughter Susan, who currently cares for the elderly couple along with three other sisters, the hardships became the building blocks of their relationship.

Diding was a stenographer in the Regional Trial Court in Quezon City Hall, while Piping worked as an area manager in the ports of Manila. But with nine mouths to feed, life had been more than a grind.

Susan said that her parents always kept their heads down, and always found a way to keep food on the table and their kids in school. Their no-nonsense partnership thus inspired their children to do the same.

Piping and Diding also maintained a great relationship, not only with each other, but also with their offsprings.

Raising a child is already a tall task, and having nine is an uphill struggle but their eighth child, Tessa, said there were no problems growing up in the large household mostly due to their parents. Inspiring the next generation in love

Piping and Diding’s love story has been an inspiration to those who know them, and their grandchildren, who have grown old enough to start families of their own, are no different.

Bearing witness to the union of their Lolo and Lola, the family’s next generation picked up a lot of lessons on love and in married life.

“They put God in the center of their relationship. Sabi nga nila, when you let God take over, everything will fall into place,” said Sarah, the fourth-eldest among Piping and Diding’s grandchildren. Sarah (left most) with grandparents Piping and Diding. She has a son, Sancho (in grey) with husband Jet (not pictured)

“It’s not easy to take care of a big household but they’ve been doing it for 70 years,” she added.

Sarah is married to her husband Jet for 10 years now. They currently have a seven-year-old child and another on the way.

Newly married granddaughter Sylvia, 31, also mirrored the same sentiments as Sarah and said that she and her husband Nick have learned that same lesson. Sylvia (left) and husband Nick with their grandfather Piping “They have complete trust, understanding and accept and love each other despite all flaws, [that is] is paramount to a lasting relationship,” she said.

Celebrating love in the new normal

As the decades had passed, Piping and Diding had no shortage of celebrations during their milestone anniversaries.

Usually decked out in evening gowns, tuxedos and barongs, the Ortega family commemorated their love with spectacular parties in hotels. But now, as the COVID-19 pandemic rolls on, the family has been forced to adapt and tone down its celebrations.

Relying on online platforms like Zoom, Piping and Diding bring their milestone to the virtual world with online religious ceremonies and a virtual concert.

Despite the subdued occasion, family and friends are what make it complete, and not the glamorous celebrations.

“What is important is togetherness, and being grateful to the Lord. That’s what we shouldn’t forget… The rest, the parties and the hotels, are just freebies,” said Corazon, one of their daughters.

“We’re forever grateful to be part of this family,” she said.

2021-10-13
AtinitoAdmin
Share
Previous Philippines brings ‘an archipelago of stories,’ first NFT graphic story to Frankfurt Book Fair 2021
Next These Quebec nurses are willing to sacrifice their careers to avoid getting COVID-19 shots