Breaking News
Home / Lifestyle / Terrarium 101: Expert gives tips on what could be the next ‘plantita’ trend

Terrarium 101: Expert gives tips on what could be the next ‘plantita’ trend

Terrarium 101: Expert gives tips on what could be the next ‘plantita’ trend 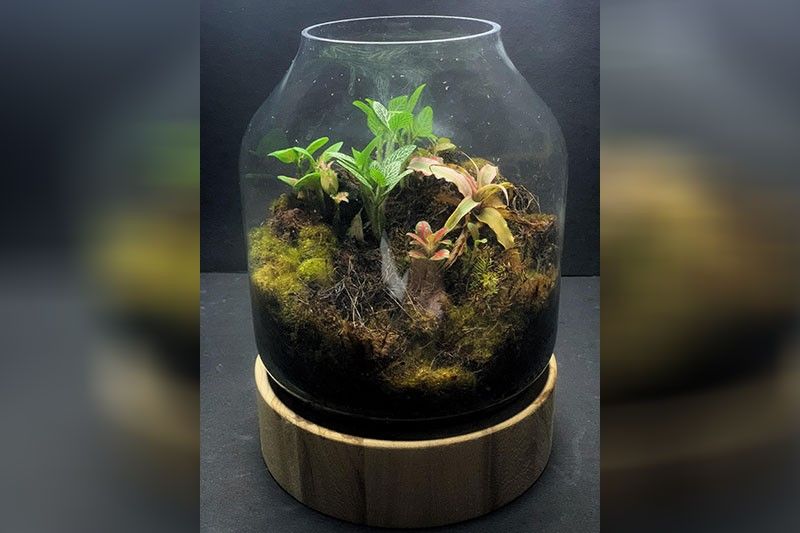 MANILA, Philippines — It was a case of curiosity that led nurse Froilan Aloro to explore the world of terrariums. Those beautiful "mini-forests" in a jar or aquarium, he said, could be the "level-up or a glow-up version" of the "plantita" craze.

He got busy in July 2020 building his first terrarium after seeing online a picture of an old man with a six-decade-old terrarium that had not been opened. He was amazed at seeing a "literal forest" inside a huge jar.

After coming across that picture online, he began researching and eventually found himself enjoying the hobby and even turned it into a business opportunity.

In an exclusive email interview with Philstar.com, Aloro explained that terrarium is a coined term for terra “earth” and -arium for the glass enclosure, which means “an enclosed earth.”

Just like Aloro, Nathaniel Ward accidentally discovered how to make the first terrarium in the 1800s. Known as the Wardian case, the English doctor accidentally came upon it after trying to learn about the growth of a certain type of moth in a jar with some decomposed leaves and fern. Much to his surprise, the plants in the jar were thriving as days passed without additional care. Thus, the terrarium was born.

Aloro found that making a terrarium has several benefits. One, it is an enjoyable hobby that requires one to be resourceful as it entails foraging for moss, one of its main components. It also leads one to create a visually appealing display in a living room or on a work desk.

"Building a terrarium, just like with other hobbies, creates a sense of joy and accomplishment that is very vital for all aspects of our well-being," he said.

Two, it can be both a bonding and lesson time about nature and biology between parents and their children.

"A terrarium acts like an aesthetic laboratory specimen where you can observe diverse activities going on: plants acclimating and growing, fungi family sprouting and surfacing, the critters and clean-up crew working their wonders, the water cycle and its movement when you see the condensation come and go, the decomposition of organic matter, and a lot more," Aloro explained.

Three, it could be a possible business opportunity. Since his first attempt in July last year, he was able to grow his business from creating terrariums, selling the supplies, and currently being one of the locals known in creating terrariums. He has also expanded to conducting workshops and consultations. His own website, howtomaketerrarium.com, has become an online marketplace that is geared toward business expansion of local suppliers, sellers and artists.

Aloro said building a terrarium has both pros and cons. The easiest part is foraging for moss which one can do by just strolling around the neighborhood. Mosses growing on riversides, pavements, dead logs, stone, and on reclaimed areas are the highly recommended picks.

He, however, stressed that one should abide by the correct and ethical way of foraging for moss especially when one goes out to the forests to look for it.

"Get only what you need, or if you sell them for profit, make sure that you only get from the middle part and ensure that these mosses were not from ancient mossy forests or in places where their presence is highly important such as the healthy forest beds," he urged.

The next plantita craze?

Aloro believes that terrariums will definitely be the next plantita craze.

He said as proof is the expansion of local aquascaping masters to the terrarium space.

"Even the hobbyists of reptiles, amphibians, invertebrates, etc. are now exploring in terrariums that the community (Facebook Group: Terrarium Philippines) I built last year, grew from zero to 5,000 plus and is still growing," he shared.

He also noticed that when he began commercializing the moss-in-the-tub and ferns-in-the-tub preparation last year, the demand for the moss had grown. Unfortunately, it attracted the attention of unwanted poachers and resulted in irresponsible moss foraging.

This is why he constantly emphasized on the ethical way of foraging for moss as well as conducted workshops. While he still works for a private company, maintains his website, and does his hobby on the side, Aloro said he dreams of partnering with local government units and non-government organizations in enforcing sustainable foraging for moss and reaching out to a wider community regarding the beauty and benefits of creating a terrarium.

Other ways to treat acne

Immortalizing a mother’s love through poetry

Diabetes and the deadly sweet tooth

Health And Family Diabetes and the deadly sweet tooth November is National Diabetes Month, the …