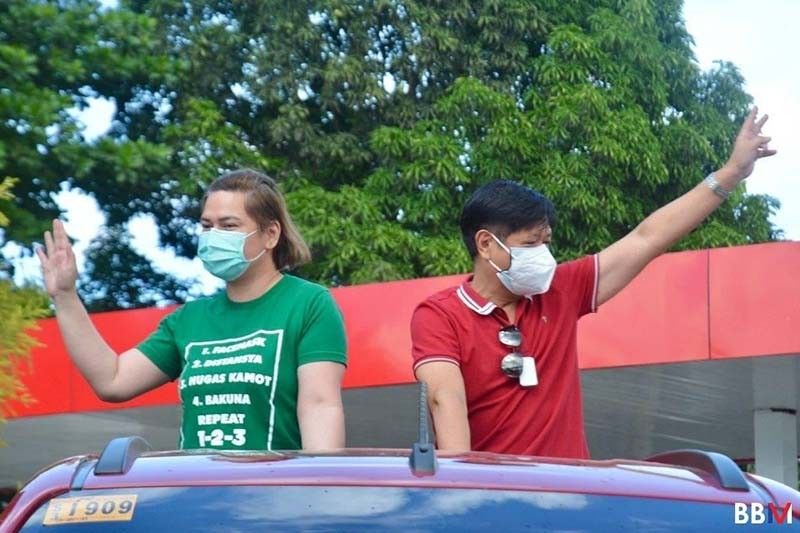 MANILA, Philippines — The tandem of presidential aspirant Ferdinand “Bongbong” Marcos Jr. and Davao City Mayor Sara Duterte-Carpio said they will pursue the current administration’s “war on drugs,” but they acknowledged the problem is a “law enforcement, economic and health concern.”

In a statement on Tuesday, the Marcos-Duterte tandem — theyy call themselves the "Uniteam" — claimed the "war on drugs" of President Rodrigo Duterte was a success, and they vowed to further enhance it.

Marcos to pursue Duterte’s ‘war on drugs’ with same vigor, but different approach

"We need to put up many more rehabilitation centers, add professionals who will take care of victims we will treat as patients, give them something to do, such as livelihood like handicrafts while in the process of rehabilitation until we can win our fight against this evil vice," they said in Filipino.

They also noted that selling illegal drugs is a "lucrative business", which is why the drug problem still persists even after five years of Duterte’s anti-narcotics campaign.

“This tells us that the problem of illegal drugs is likely to persist for as long as the drug trade is a lucrative or profitable enterprise despite the inherent danger of arrest or even death in the hands of law enforcers,” they added.

Government figures showed that at least 6,000 people were killed in anti-narcotics operations, but human rights groups put the number of deaths to as high as 30,000. Critics also pointed out that the "war on drugs" was mostly waged against the poor, and failed to net big-time drug lords.

In a TV interview in October, Marcos said if he wins the presidency, he will also focus on prevention, educating the youth on the ill effects of drugs and improving rehabilitation centers.

Duterte has been an ally of the controversial Marcos family, which had gone into exile in the United States after the patriarch's humiliating downfall in 1986.

But, of late, Marcos has been at the end of recent tirades of Duterte — who is backing the presidential bid of his long-time aide, Sen. Bong Go—who went as far as calling the dictator’s son a "weak leader… saddled with baggage."

Duterte has also been repeating claims on a presidential hopeful who uses cocaine but has not identified the aspirant.

Although he said he does not feel alluded to by Duterte’s claims, Marcos said he underwent a drug test anyway. He said he tested negative for cocaine and results have been submitted to the Philippine Drug Enforcement Agency, Philippine National Police and National Bureau of Investigation.

Presidential hopeful, Sen. Manny Pacquiao, who has admitted using marijuana and crystal meth in his youth, said he supported mandatory drug testing for those seeking a government post.

"Although I'm not in a position to judge anyone on this issue, I am willing to undergo a drug test anytime and anywhere," Pacquiao said Friday, suggesting a hair follicle test offered "better results".