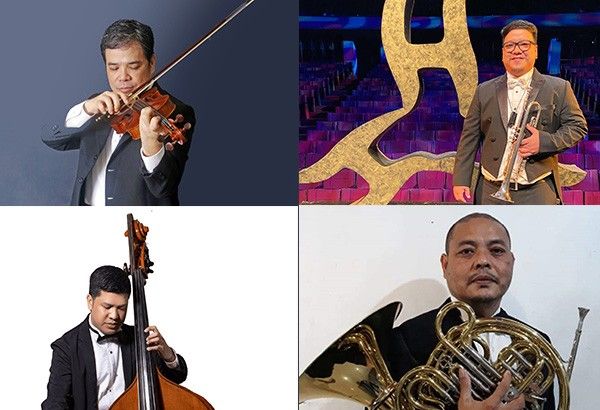 MANILA, Philippines — When the global pandemic hit last year, the Philippine Philharmonic Orchestra (PPO) was one of the entities that had to temporarily close down. But with the easing of quarantine protocols, the PPO came out from its lengthy lethargy to resume where it left things off.

From its live stage and/or hall performances, the PPO now brings its music to the digital space. "The PPO is continuously seeking ways to serenade audiences outside the confines of the CCP (Cultural Center of the Philippines). From November 2021 until June 2022, the PPO will feature eight musicians playing various classical pieces on the flute, clarinet, trumpet, French horn, violin, viola, and contra bass.

"Music heals and soothes the soul and bring about its wellbeing; making life vibrant. Our outreach program will kick off in Pampanga in January 2022, Bohol in February, Baguio in March, and then to Sorsogon and Legaspi thereafter – bringing back that magical connection between audience and orchestra," informed CCP president Arsenio "Nick" Lizaso.

The PPO's national tour will also be accompanied by other resident companies of the CCP such as Ballet Philippines and the Bayanihan Dance Company.

"We will be premiering the recital series starting on No. 26, and every last Friday of the month until June 2022. This replaces, in the meantime, the face-to-face performance series. Music knows no bounds. It thrives despite the pandemic," apprized orchestra director Eugene de Los Santos.

As the first artist to be featured, flutist Hercules Santiago played for virtual media attendees, during its recent Webinar to promote the recital series, the Flute Sonata in C Major.

"Recitals are always a collaborative effort in choosing the repertoire. And clearance is always given to anyone wanting to play a certain piece," intoned clarinetist Ariel Sta. Ana.

"The transition from live performance to a digital recording is quite difficult. For instance, quietness is essential during our recordings. Sometimes, when we record a performance, external noises just pop out of nowhere so we need to start over again," revealed violinist Dino Decena.

"Music is my medium to connect with my audience. In a live setting, you draw your emotions from spectators. In recordings, you simply follow a click track. Since I don't own a studio, I do my recordings between 1 am to 4 am, when everything's quiet," intimated viola artiste Ray KC Concepcion.

The PPO Recital Series will begin to roll out the solo performances on Nov. 26 with Hercules Santiago on the flute. The series will then continue every last Friday of the month until June 2022 and can be viewed at the PPO' s Facebook channel. Other featured artists include Hernani Pascual (French horn), Glober Calambro (trumpet), John Carlo Gonzales (cello), Ariston Payte III (contra bass).

"The notion that the PPO is an elitist entity has always been there. How we perform Western music, how we interpret its influence and style as Filipino artists is what makes us reachable to audiences. The recital pieces are always classical compositions. This is because recital shows are about the artistry and how students of music and performing arts understand and interpret the said pieces. The online shows will play for 30 minutes or less because of the belief that online viewers will not sit through a classical performance," added the orchestra director.

Music lovers are also invited to watch the PPO's first live public performance, after the lockdowns, on Dec 3, in front of the Philippine Post Office building at 6 pm.

Milestones for Frank and Chef Tatung

Setting up for a festive Christmas