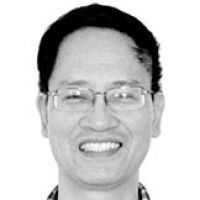 Santos was a premiere Tagalog-language writer and senator of the Philippines. He is best known for his 1906 socialist novel, “Banaag at Sikat,” and for helping develop Filipino grammar and Tagalog orthography.

He went to law school at the Academia de la Jurisprudencia, then lodged at the Escuela Derecho de Manila (now the Manila Law College Foundation) and received the Bachelor of Arts degree in 1912. In the late 1900s, Santos also started writing in his own newspaper, “Ang Kaliwanagan” (“The Light”). This was also the time when socialism was beginning to be felt in many parts of the world.

“Banaag at Sikat” was read widely and well. When later published as a book, it was considered the first “proletariat novel in Asia.” It expounded on the principles of socialism and sought labor reforms in the government. This was like an electric volt, for then the Philippines was newly colonized by the United States and being turned into a source of raw materials and a market for processed goods. Work in factories was booming, and wages were low.

“Banaag at Sikat” was considered a fountain head of social realism in the tradition of the Tagalog novel. It starkly mirrored the various forces clashing during the early days of American colonization in the Philippines. In this guise, the novel could be seen as a social text.

The ripples of the book even went beyond journalism and literature. It inspired the assembly of the 1932 Socialist Party of the Philippines, and then the formation of the 1946 group, the Hukbalahap (formerly, Hukbong Bayan Laban sa Hapon).

In 1910, the visionary Santos started his campaign to promote a “national language,” where he organized various symposia, lectures and headed numerous departments of national language in leading universities. In 1910, he was persuaded to run and was elected governor of the province of Rizal under the Nacionalista Party. In 1918, he was appointed as the first Filipino governor of the newly resurveyed province of Nueva Vizcaya, serving until 1920. Consequently, he was elected to the 5th

Philippine Legislature as senator of the 12th senatorial district representing provinces having a majority of non-Christian population.

As a public servant, Santos never lined his private pockets with stolen public funds. He also tried to apply, in the real world, the words and the principles that he wove in his fiction.

In 1940, Santos published the first grammar book of the “national language,” the “Balarila ng Wikang Pambansa” or “The Grammar of the National Language.” It was an important work commissioned by the Surian ng Wikang Pambansa (SWF). The next year, he was appointed by President Manuel Luis Quezon as the director of the SWF, where he stayed until 1946. When the Philippines became a member of the United Nations, he was selected to translate the 1935 Constitution for the UNESCO. He was also appointed to help in the translation of the inaugural addresses of Presidents Jose P. Laurel and Manuel A. Roxas.

“Banaag at Sikat” revolves around Delfin, a poor writer in love with Meni, a capitalist’s daughter. Delfin, who is also a law student, is a socialist while his friend Felipe is an anarchist. Ironically, Felipe is the son of a rich family in the south, but he wants to turn his back on inherited wealth.

Delfin wants the citizens to have more rights in business and property relations. He believes that society could be changed through education, an idea that has echoes from Jose Rizal’s first novel, “Noli Me Tangere,” which I discussed in my column last week.

Dr. Patricia Mae B. Jurilla, in her book “Tagalog Bestsellers of the Twentieth Century: A History of the Book in the Philippines,” said: “Banaag at Sikat is now recognized as the most prominent work of the period known as the Golden Age of the Tagalog novel (1905-1921) and a milestone in the history of Tagalog fiction for its engagement with social issues…”

The eminent historian and National Scientist, Professor Teodoro Agoncillo, wrote: “Banaag at Sikat was a very influential book. It was avidly read by the masses and the intellectuals. In no small measure, the book influenced the workers fighting for economic, social and political reforms. As a result, more and more labor unions sprouted and the laborers resorted to strikes – particularly those involved in cigar and cigarette manufacturing. This was to the discomfiture of the capitalists who had been accustomed to pushing the workers around.”

For his part, the Marxist critic, Dr. Epifanio San Juan, said: “In Banaag at Sikat, Santos succeeded in condensing the whole history of the Filipino ‘ilustrado’ (‘the enlightened or educated ones’)… The novel is a true exemplar of revolutionary art.”

Published 116 years ago, I translated the novel in a contemporary English for readers of the 21st century. Its burning passages on race, class and colonialism still resonate today. May we learn to shape our lives so that, like the characters in this novel, we can help change our world.  – Danton Remoto

2022-01-22
AtinitoAdmin
Share
Previous Coronavirus: What’s happening in Canada and around the world on Jan. 22
Next Saving private education