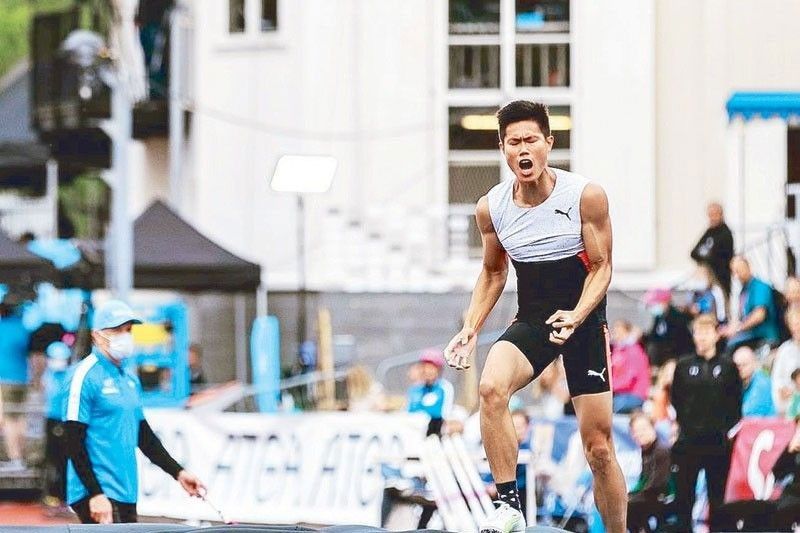 MANILA, Philippines — If plans don’t miscarry, world No. 5 pole vaulter EJ Obiena will go up against Olympic gold medalist Armand (Mondo) Duplantis at the Init Indoor Meeting in Karlsruhe, Germany, on Jan. 28 but the Filipino’s participation will depend on how quickly he recovers from the menisectomy that was performed on his left knee last Tuesday.

The 90-minute procedure went smoothly at the Surgery Center in Uhingen, Baden Wurttemberg, Germany under Dr. Dimitri Alexander Jontschew, medical director of the Southwest German Center for Sports Traumatology. “Surgery was OK,” said Obiena. “I’ll be in Germany for post-surgery assessment until Sunday then I go back to Italy. Dr. Dimitri believes I can still compete on Jan. 28. I’m actually walking fine with no pain blockers. I was on crutches when the anesthesia was still on. Then, when I started to feel everything, I was told to walk slowly. I believe it was a miracle and I’m hoping for another, too. I’m walking without crutches but just very, very slowly.”

Obiena’s adviser Jim Lafferty said Dr. Jontschew cleaned up the meniscus. “During surgery, they noted one of the screws put in during his 2017 ACL surgery was loosening,” he said. “So they removed it. As the bone graft has fully solidified, this wasn’t an issue and shouldn’t impact his recovery. We’re still aiming for Jan. 28 in Karlsruhe.” Doctors didn’t replace the screw that was taken out and repaired the tear by shaving it. The “shaving” process trimmed off the small piece that was “dangling” and “getting caught in between the bones that causes pain, it’s part of the meniscus, the shock absorber between the bones of the knee.”

A member of Obiena’s team said it will take six days of complete rest to recover from the surgery that was done to address a small meniscus tear. “It’s good to point out that EJ will have six days to fully recover before he can only do upper body workouts, core training and gymnastics,” the member said. “All without jumping. He only has 11 days before his first event where he will face the world’s top eight pole vaulters, including Duplantis. He has at most eight days to get into shape and tweak his jump.”

Aside from the Karlsruhe competition, Obiena is planning to join the ISTAF Indoor in Berlin on Feb. 4 preparatory to representing the country at the 29-nation Asian Indoor Championships in Nur Sultan, Kazakhstan on Feb. 11-13.

Obiena, 26, was recently promoted from No. 6 to No. 5 in the world rankings and cited for registering the third highest jump last year, tying Sam Kendricks and Timur Morgunov with 5.93. Only Duplantis, Chris Nilsen, Kendricks and KC Lightfoot are ranked higher than Obiena in the world standings. Duplantis, 22, holds the world’s indoor record of 6.18 and has confirmed his attendance in Karlsruhe.

Canadian sports icons including Stacey Allaster, Donovan Bailey and Angela James are among the 85 …