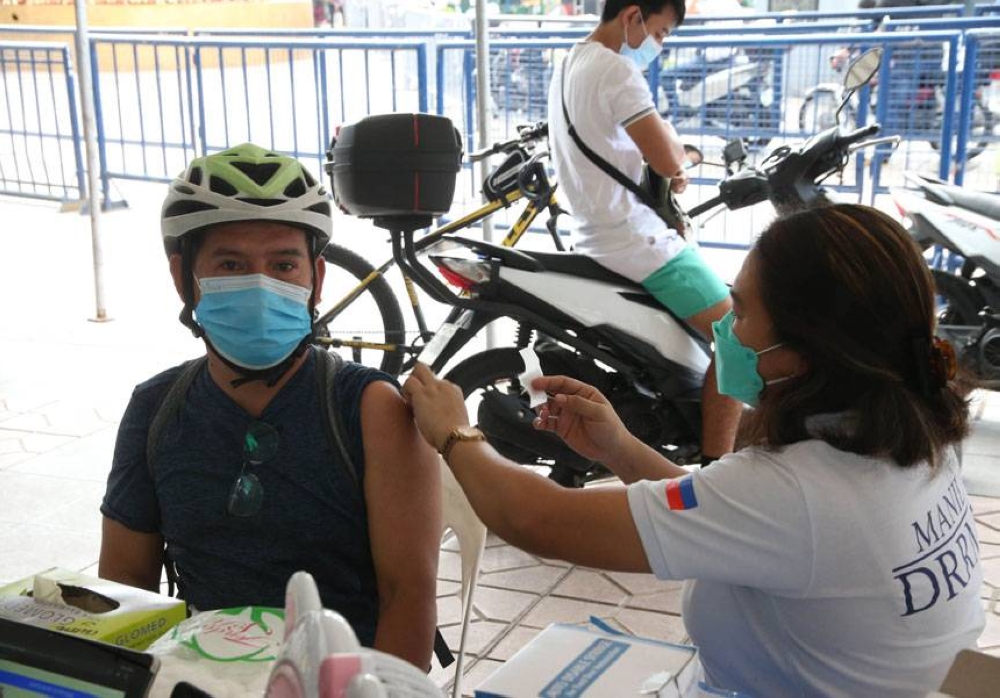 Riders receive doses of the Covid-19 vaccine booster shot at a drive-thru vaccination center from the Kartilya ng Katipunan, Lawton, Manila on Jan. 22, 2022. Vaccine hesitancy among Filipinos have dropped from a Social Weather Stations survey conducted during the last quarter of the year 2021. PHOTO BY RENE H. DILAN

EVEN as the Omicron surge continues, world leaders should work together to prevent the next Covid-19 variant from emerging. People should come together to stamp out Covid-19 as quickly as possible through vaccinations and information drives that not only remind the public about health protocols, but also debunk falsehoods about the vaccines.

Looking at the next threat may seem like a distraction with Omicron still spreading. In fact, more Philippine provinces were recently placed on the highest alert level.

The point is, Omicron is already here and just needs to be managed.

But unless other countries can also stamp out Covid-19, it can mutate yet again and threaten everyone.

Fortunately, Omicron does not seem to be as potent as the earlier Covid-19 mutations. Some even describe the latest variant as mild although that seems misleading given the fact that it is deadlier than the common flu and dangerous to those who are unvaccinated and others with comorbidities. Plus, epidemiologists still have much to learn about Covid-19, including its long-term health impact.

In other words, Omicron reminds the world that no one is safe so long as the coronavirus circulates somewhere. Its origins seem so far away to locals, and yet, thousands test positive daily here. Other countries have it even worse, including developed nations.

This common problem suggests that the leaders have to do better in supplying the global population with Covid-19 vaccines. They also need to collaborate on public information campaigns that address vaccine hesitancy.

Ethiopia, for instance, ranks fourth in Africa in the number of Covid-19 cases, but only 1.4 percent of Ethiopians have been fully vaccinated.

Except for South Africa, which has the most cases in Africa to date, the next two countries, Morocco and Tunisia, have vaccination rates of more than 50 percent.

As we saw in South Africa, the combination of a high number of cases and a low vaccination rate can be a dangerous mix. Covid-19 has repeatedly demonstrated its ability to spawn new variants many times.

Unless that trend is broken, we can only hope and pray that the new threat is not as contagious as Omicron or as deadly as Delta. And what if the new strain is resistant to the existing vaccines?

Of course, vaccine inequity is not just an African problem. There are also Asian countries that also have that deadly combo of high cases and low vaccinations. One is Myanmar, where public health has been overshadowed by its internal political strife. Another is North Korea, which is basically a black hole in terms of any Covid-19 information.

So, even after the Philippines deals with Omicron, the country remains vulnerable to the possibility of new variants that might emerge abroad and rapidly cross the globe. And as with any public health threat, developing nations are the least protected.

As mentioned earlier, vaccine hesitancy is also a major concern. But the logistical challenges should be resolved first. There is little point in convincing people to get a jab if they cannot get one where they live.

In the Philippines, acquiring more doses helped somewhat against vaccine hesitancy. Perhaps seeing others get vaccinated reassured others to also get one. In any case, the scientific data overwhelmingly suggest that the vaccines are effective and safe.

To date, however, just over 52 percent of the global population have been fully vaccinated. If we assume that herd immunity can be realized by inoculating at least 70 percent of the population, we still have a long way to go on a global scale.

Meanwhile, the World Health Organization reports that there are 340 million cases worldwide, including more than 49,000 in Southeast Asia.

As the saying goes, the world either stands united against the pandemic now, or divided we might fall.