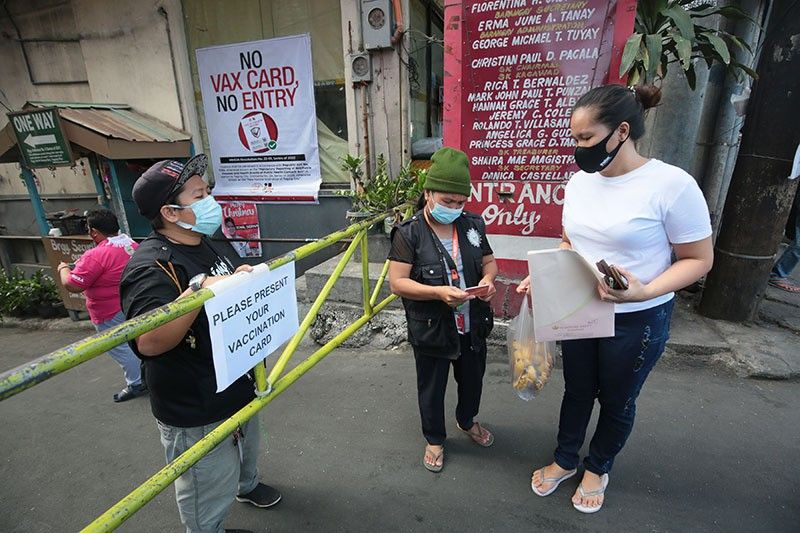 MANILA, Philippines — Malacañang on Tuesday urged the public to listen to legitimate experts instead of what it claimed were “rumormongers” when making decisions on their COVID-19 vaccination status.

At the Palace’s press briefing Tuesday afternoon, Cabinet Secretary Karlo Nograles doubled down on the national government’s restrictions on the unvaccinated, saying the moves are done precisely to protect them.

“That is our objective in all the ordinances and resolutions and directives are to protect them. All the records and data and health experts tell us that they are the most vulnerable,” he said.

This comes after groups expressed strong opposition to the government’s strong-arm approach towards the unvaccinated, which includes:

At the same time, though, only 67.8% of Metro Manila residents are fully vaccinated while just 88% or almost nine out of ten households in Metro Manila do not own private vehicles and rely on public transport.

The Concerned Doctors and Citizens of the Philippines on Monday hit what it said was the “discriminatory, segregationist, and unconstitutional” measures instituted by the coronavirus task force against the unvaccinated.

“Every Filipino has a constitutionally-protected right to make informed choices especially regarding decisions that directly affect their personal health and the well-being of their families and loved ones,” the group said.

“There are Filipinos who are willing to be voluntarily vaccinated, and there are other Filipinos who are concerned that current COVID-19 vaccines were approved only under an emergency use authorization without long-term clinical trials on side effects and adverse reactions.”

At the Palace briefing Tuesday, Dr. Lulu Bravo, executive director of the Philippine Foundation for Vaccination, Inc., said that the risks and adverse events linked to vaccines are all thoroughly studied before vaccines are rolled out.

“Those are anticipated and then treated with medicine when they happen. But that doesn’t mean we shouldn’t vaccinate anyone anymore,” she said in mixed Filipino and English.

Bravo, who is also convenor of the Vaccine Solidarity Movement, highlighted that the public health recommendations of healthcare experts are meant to protect vulnerable populations.

She also presented data showing that the efficacy rate of two doses of Pfizer, Moderna, or AstraZeneca go down to 50% after six months but go back up to 80% after a booster shot is administered.

“This is where the problem comes, that more importance is placed on individual rights rather than the majority. But for us in public health, we save millions of lives at a time,” she said.

Although President Rodrigo Duterte has repeatedly argued that the state can compel vaccination, there have been no moves to pass a law that will make COVID-19 vaccination mandatory.

Though the Palace repeatedly points to the need to protect unvaccinated Filipinos, it still has not yet answered the question of the legal basis and constitutionality of restricting the mobility of the unvaccinated.

In early January, the Coalition for People’s Right to Health called on the national government to focus its efforts instead on testing, treatment, surveillance, and vaccination instead of enforcement of strict protocols.

“Instead of capacitating a health system, the present administration is increasingly resorting to illogically locking down unvaccinated individuals in yet another attempt to reduce a public health matter to one of discipline,” the group said.

“Epidemiologically, both the vaccinated and unvaccinated remain at risk of breakthrough infections and/or reinfections with the newer variants, and thus containment and treatment strategies for all must be the focus, instead of discriminative or punitive measures that infringe on human rights.”

Proclamation of party-lists with DQ raps on hold