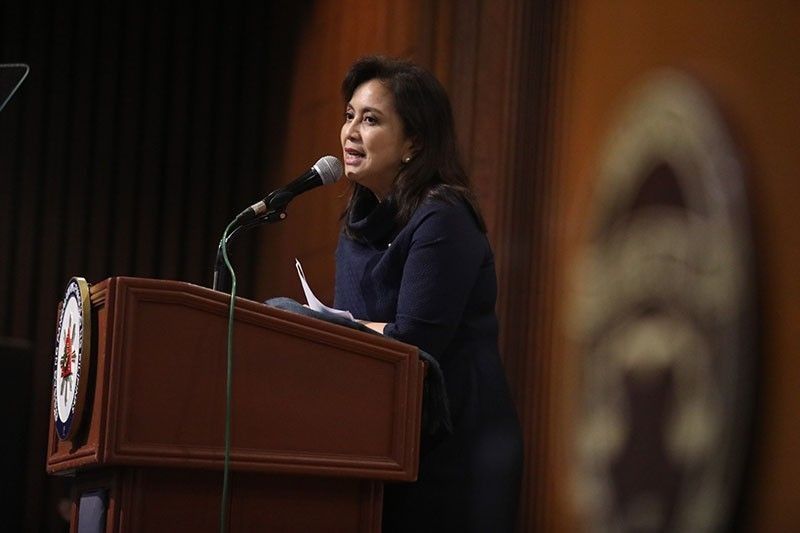 MANILA, Philippines — Does Vice President Leni Robredo believe that Filipinos need a strong leader with an iron fist? If that phrase means being a courageous leader, she said, then she’s already shown time and again that she can be that leader.

At the Jessica Soho Presidential Interviews aired over GMA News late Saturday evening, veteran journalist Jessica Soho asked the vice president for a reaction to the sentiment that a country like the Philippines needs an iron-fisted leader instead of a mother.

“It depends how you define an iron fist. If you define it as a show of courage, then in my stages as a vice president, I’ve already shown this. This has nothing to do with gender, it’s in how you make decisions in many aspects in life,” Robredo replied.

Over the coronavirus pandemic, political scientists have observed that populist leaders around the world like Duterte have been able to exploit the narrative that “during times of anxiety and disorder and crisis, there’s only one person who is able to bring back order, and that’s a strongman [or] populist leadership.”

When President Rodrigo Duterte won the presidency by a landslide in 2016, it was largely due to his tough-talking, no-nonsense, and street-smart image. He has often courted controversy for his brash and outlandish statements, with his spokespersons urging the public not to take them literally. Robredo has been much the opposite.

Asked about the phrase “Leni lugaw” (rice porridge) being attributed to her, Robredo said that the phrase was “more symbolic in the sense that that’s why it stuck to me.”

“In 2016, when I was running, I also didn’t have the resources. Our volunteers, these are the fundraising activities. And the volunteers now in 2022, that’s also what they associated with me. So that’s their way to show solidarity. That is their way of showing people that we are with you in this battle.”

Pro-administration figures and influencers have regularly hurled the phrase “Lugaw Queen” to belittle the vice president in reference to her campaign team’s effort to raise funds by selling rice porridge during the 2016 elections.

Robredo — who has long been recognized as the de facto leader of the opposition — has long been critical of the Duterte administration’s projects and policies, from its war on drugs to its pandemic response.

The vice president pointed to her brief stint as co-chair of Inter-Agency Council on Anti-Illegal Drugs and referred to her acceptance of President Rodrigo Duterte’s decision to appoint her as “entering the lion’s den.”

To recall, Robredo’s term only lasted a month: Duterte appointed her as a dare in response to her criticisms over his drug war, and then later pulled her out because he did not trust her as an opposition member.

She said she has also gone through hostilities from both administration-allied government officials — many of whom are men — and peddlers of fake news.

Robredo on Saturday evening highlighted the need for mechanisms to give voices for disagreement within the government.

Her shortened ICAD tenure wasn’t the first time. For most of her term, Robredo’s functions have been limited due to tensions between her and President Rodrigo Duterte.

“I think that was our missed opportunity after 2016…those who were sitting in power should have extended their hand to make sure that those who were not their party mates had unity,” Robredo lamented.

“Political might and machinery can’t say anything against the desire of the people to fight for the country,” she also said, adding that her campaign’s strength is in the “passion, commitment and dedication of many volunteers.”

In a separate portion of the interview, though, Robredo also said that she was not in favor of same-sex marriage and divorce in the Philippines.

Asked if the International Criminal Court should prosecute President Rodrigo Duterte, Robredo did not give an answer and claimed she was not in any position to say if Duterte must be prosecuted. She was careful to point out that the international court was still in its preliminary investigation stage.

However, judges of the ICC have already since approved a full investigation into potential crimes against humanity committed during the drug war. At this stage, summons and arrest warrants can already be issued should the prosecutor so decide.

Robredo went as far as saying that she would vote for Pacquiao if she was not in the race. Pacquiao was one of the first ones she approached for a possible alliance, a move that other opposition groups questioned given Pacquiao’s close relationship with the administration earlier.

“I know him personally, and I know that he is a very sincere person,” she said in Filipino.

Asked about whether or not her campaign received donations from foreign entities, Robredo distanced from her supporters’ crowdfunding efforts. “There are disclosures for citizenship [and] supporters are well-informed [of our rules] when sourcing funds… None of that amount was received by us,” she said.

“I will make sure government processes and transactions are transparent… people should be participating in governance to make sure officials are law-abiding.”

— Franco Luna with a report from Xave Gregorio

2022-01-23
AtinitoAdmin
Share
Previous Pacquiao: Equal enforcement of law is the right way to unite country
Next Fort Frances was the first Ontario town to ban single-use plastics. So how’d it go?