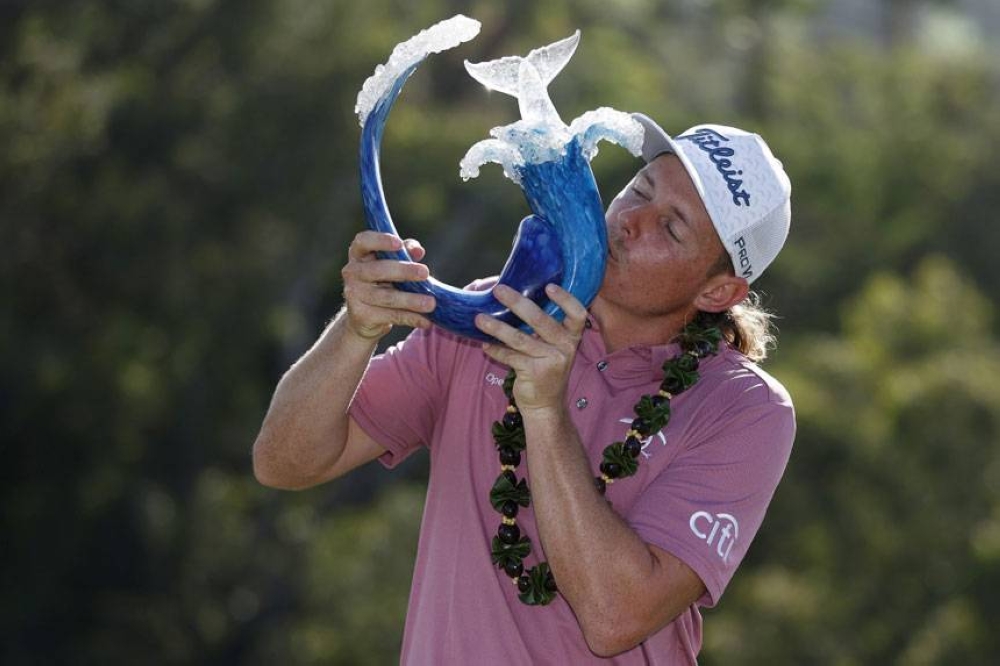 Cameron Smith of Australia celebrates with the trophy after winning during the fifinal round of the Sentry Tournament of Champions at the Plantation Course at Kapalua Golf Club on Sunday, Jan. 9, 2022 (January 10 in Manila) in Lahaina, Hawaii. AFP PHOTO

The 28-year-old from Brisbane finished with the lowest 72-hole tournament score in US PGA Tour history, shooting 34-under 258 on the par-73 Plantation Course at Kapalua, Hawaii.

Rahm fired a 66 to finish second on 259 with Australian Matt Jones third on 260 after matching the 18-hole course record with a 61.

All three beat the old PGA 72-hole record low score in relation to par in a 72-hole event, the 31-under by South African Ernie Els at Kapalua in the 2003 Tournament of Champions.

Last-pair partners Smith and Rahm traded birdies like boxers exchanging punches down the back nine.

“Unreal round, something I'll never forget for sure,” Smith said.

“It was intense. Jonny and I played well all day and Matty was playing well in the group in front of us.”

Rahm was stunned after the round that he wasn't celebrating a victory.

Smith, who played his final 51 holes without a bogey, was just shy of the green in two at the 18th while Rahm gave himself 54 feet for eagle.

Smith rolled the ball 3 1/2 feet short of the cup while Rahm was one foot right of the cup. Rahm tapped in for birdie to briefly grab a share of the lead one final time but Smith followed by sinking his birdie putt for the victory.

Rahm and Smith shared the lead with a five-stroke edge on the rest of the field when the day began.

Smith sank a birdie putt from just outside five feet at the fourth to grab the lead alone and both Rahm and Smith tapped in for birdies at the par-5 fifth.

The Aussie rolled in a 23-foot birdie putt at the par-3 eighth to seize a two-stroke edge and each birdied the par-5 ninth.

Jones birdied six of the first 10 holes, eagled from 85 yards in the fairway at the par-4 13th, sank a three-foot eagle putt at the par-5 15th and holed a 51-foot birdie putt at 17 but was never better than two adrift of the lead despite an unprecedented 62-61 weekend.

World No. 2 Collin Morikawa could have overtaken Rahm for the top ranking with a top-three finish. His closing 62, his PGA career low, left him sharing fifth with fellow Americans Justin Thomas and Daniel Berger on 267.

Reigning British Open champion Morikawa birdied seven of the first 10 holes, added a nine-foot birdie putt at 14 and a 10-footer for eagle at 15 then closed with a birdie.