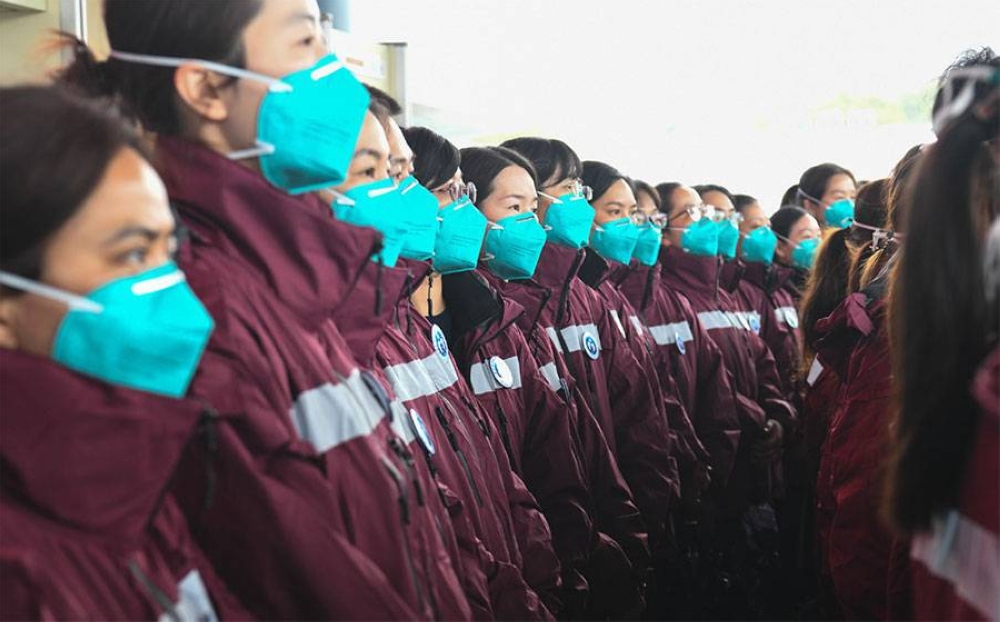 EFFICIENT PARADIGM The second antipandemic work group from the Chinese mainland to support the Covid-19 control efforts of the Hong Kong Special Administrative Region (HKSAR) gets ready to depart from Shenzhenwan Port in Shenzhen, south China’s Guangdong Province, on Saturday, Feb. 19, 2022. The 114-member work group left from the southern Chinese city of Shenzhen on Saturday and will cooperate with the HKSAR government in critical care research, treatment and nucleic acid testing to help Hong Kong control its latest resurgence of Covid-19. XINHUA PHOTO

CHINA’s Lunar New Year holidays just ended, yet across the country, factories have already been roaring back. Goods from iPhones, Tesla vehicles and daily necessities to medical gear flow from the manufacturing powerhouse to brightly lit ports and are shipped abroad after a stringent disinfection and clearance process.

That’s a routine for China’s supply chain under the country’s “dynamic zero tolerance” Covid-19 policy, which outshines the chaos in the US, where goods are piling up in ports and citizens are grumbling about a supply shortage due to the pandemic and inefficient antivirus efforts.

With humming production lines securing stable employment and workers’ income, a number of influential economists agree that the zero-tolerance strategy will only affect 0.6 percent of China’s GDP assuming the effect lasts a quarter, diluting the repercussions of a softness in service consumption in the world’s second-largest economy.

Such a trade-off also leaves the rest of the world contemplating China’s calculus on the cost and benefits of its dynamic zero-Covid-19 approach in the social, political and economic dimensions. In addition to channeling a sense of predictability and security to citizens’ lives, China is also demonstrating its global responsibility by putting into tremendous resources and cost to ensure a smooth global supply chain and easing inflation pressure, economists pointed out.

“Using the data of the respective GDP per capita, we find that the total GDP in [medium- and high-risk zones] is just 2.6 percent of China’s total GDP… Since there is still economic activity in these regions and the period being affected is typically 30-40 days, our estimate is that the economic impact will only be 0.6 percent of annual GDP,” Raymond Yeung, Chief Economist of Greater China at Australia and New Zealand Banking Group (ANZ), told the Global Times.

The ANZ recently published a report led by Yeung on the economic cost of China’s Covid-zero approach. The report concluded that the policy has a limited impact on the economy because measures are highly localized and targeted.

A handful of renowned economists the Global Times approached have reached consensus on the results, one of the first systematic evaluations on China’s zero Covid-19 policy, which was released at a time when Western media and politicians heaped vilification against the measure.

Liu Shijin, deputy director of the Economic Affairs Committee of the CPPCC National Committee, told the Global Times that the zero-Covid policy is the most cost-effective one in accordance with China’s realities, as proven by the 8.1 percent GDP growth last year, factoring in the cost of anti-epidemic efforts.

“There is always a risk for China — a 1.4 billion people country — to adopt an alternative approach as life is priceless and economic disruption could be even more material,” Yeung said, adding that other countries have seen thousands to millions of newly infected cases every day.

“The policy is relevant in terms of protecting the supply chain. It ensures that there will not be a widespread outbreak of the epidemic across the country and a minimum impact on production and life,” Hu Qimu, chief research fellow at the Sinosteel Economic Research Institute, told the Global Times, noting that the precise control of the epidemic also allows authorities to mobilize cross-region resources to aid virus-hit regions.

From a long-term perspective, that equates to an indirect way of supporting consumption, according to analysts, who pictured a “virtuous circle” during which stable production creates stable jobs and results in the rise of household income, eventually boosting consumption.

The manufacturing industry is one of the main sources of China’s employment market. China’s small- and medium-sized enterprises, some of which are manufacturers, contribute roughly 80 percent to urban employment.

The account book goes beyond. Analysts said that if China, the world’s largest exporter of goods, had let it go like other countries rather than fight Covid-19, global inflation would have skyrocketed.

“If China’s supply chain collapses, the impact on the global supply chain will be immeasurable. So China’s sacrifice to its economy is a bargain for the stability of global supply chains and the safety of its citizens,” Tian Yun, former vice director of the Beijing Economic Operation Association, told the Global Times.

According to the ANZ report, the worst-performing sectors since the pandemic broke out are leasing and commercial services as well as hotels and catering services, which account for only 4.7 percent of China’s overall economic growth.

“It will deal a blow to large service-oriented consumption, such as tourism. What’s worse is that Chinese spending on services has overtaken commodity consumption since 2020 and become a new growth driver,” Tian explained, adding that international business travel is inhibited as well.

Waning service consumption could pack a powerful punch to China’s new job creation and supply side. It also weakened the contribution of expanding residential income to consumption, though the extent is difficult to gauge, analysts said.

Guan Tao, global chief economist at BOC International (China) and a former senior official at the State Administration of Foreign Exchange, told the Global Times on Thursday that the impact on the overall services sector is bound to be great but not “fatal,” since it’s an intermittent, organized and predictable and short-term hit rather than a destructive one.

Wang Dan, chief economist of Hang Seng Bank (China), calculated that based on the average of 2 million jobs for 1 percentage point of GDP, 0.6 percent affected GDP by zero Covid policy is equivalent to 1.2 million jobs. “The services industry creates more GDP than manufacturing, so over 1.2 million jobs were put at risk.” But Cao Heping, an economist at Peking University, highlighted the difference between China’s zero-tolerance approach and “lying flat” policies against Covid-19 pandemic adopted by some Western economies.

“It is true that China will lose some labor in the process of ‘dynamic clearing.’ But new jobs are created at the same time, with technological progress. So it’s a dynamic process,” said Cao, noting that labor lost in the West bears no resemblance as it inflicts permanent and pure loss.

In January, IMF managing director Kristalina Georgieva said China’s zero-Covid policy is increasingly looking like a “burden,” which is impinging economic recovery both domestically and for the world, CNBC reported.

Economists said the international community still has a misunderstanding of China’s zero-Covid approach and has exaggerated it as a lockdown of a province or a city rather than a more precise and fixed area which can even be as small as residential quarters.

It is important for Western politicians and economists to take account of the social stability and political significance when calculating costs and benefits of the approach and they were urged to look at both “bigger and long-term,” analysts said.

“It is fair to say that Chinese people are living a quite happy life under the approach and almost everyone in China feels a sense of security [thanks to it],” Wu Zunyou, chief epidemiologist at the Chinese Center for Disease Control and Prevention, told the Global Times.

The government’s capacity to stifle the virus swiftly also gives Chinese people the confidence to work and spend for the future. “The influx of foreign capital during the epidemic also proved that China is the ‘safest’ place to invest while others were still under a Covid crisis,” Wang Yiwei, director of the institute of international affairs at the Renmin University of China, told the Global Times on Thursday.

The credibility of the Chinese

The credibility of the Chinese government with its “put the people first” policy, the rapid digitalization transformation and the successful hosting of the Winter Olympic Games all proved the value of China’s current anti-epidemic policy should be calculated well beyond economics, Wang said.

Stock markets sell off as inflation fears settle in

Ford recalling 350,000 SUVs due to unexplained engine fires, including some sold in Canada

US retail sales up 0.9% in April amid high inflation

Despite soaring fuel prices, most of us are still driving just as much, an instructive …