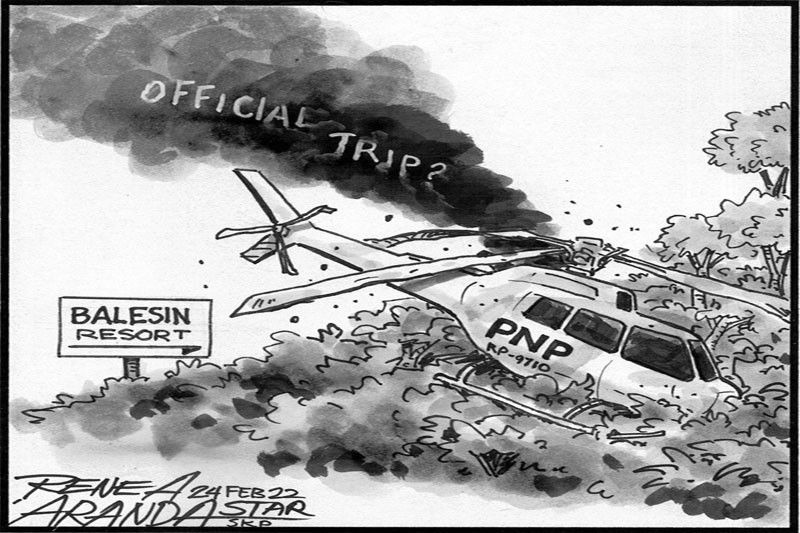 Judging from the initial reactions of government officials, it is standard operating procedure for the chief of the Philippine National Police to use a PNP vehicle for his personal use.

But the issue has attracted national attention because the vehicle in question is a helicopter, which tragically crashed and left a police officer dead and two others injured on its way to pick up PNP chief Gen. Dionardo Carlos from the luxury resort island of Balesin last Monday morning.

Carlos has admitted that he had spent “private time” last Sunday on Balesin, and had reserved a private transport for his return to Metro Manila the next day. When told that the private transport would be available only on Monday night “due to unforeseen circumstances,” he said he arranged to be picked up by the police helicopter “so I can perform my duties” at the PNP headquarters at Camp Crame in Metro Manila.

The Department of the Interior and Local Government has defended Carlos, saying the PNP chief is entitled to the “privilege” of being picked up by the police helicopter so he could return to work at Camp Crame. Still, this incident should prompt a review of the use of government vehicles.

The PNP chief may be entitled to helicopter transport perks in carrying out his duties. But there have also been reports of government vehicles being used for clearly personal uses even by barangay personnel, including for household errands such as going to the wet market or taking children to school. The PNP helicopter crash highlights the need to ensure the judicious use of public assets.