Breaking News
Home / Entertainment / I wear the sweatpants, you dress up for the ball

I wear the sweatpants, you dress up for the ball

You can call me Captain Sweatpants. When the pandemic started two years ago, sweatpants became my go-to clothing. I slept in them, did online workouts in them, walked the dog in them, and did food runs in them. When I broke my right wrist, they became the easiest thing to put on.

Despite the no nonsense convenience of it all, part of me does miss fixing up for the things — in person meetings (which still relegated to Zoom), the movie screenings, the conventions. For now, I’m enjoying other people do the dressing up for me.

I started on the HBO’s “The Gilded Age” last week and I am taken back to an era when people spent a good deal of time putting on well fitted items of clothing — skirts, suits, dresses and hats — and made sure every hair was in place. Rules of engagement, codes of conduct and matters of etiquette dictated how people carried themselves when it came to socializing.

And as far as Agnes van Rhijn (Christine Baranksi) is concerned, “We receive the old people in this house, not the new.”

This is what she tells her sister Ada Brook (“Sex and City” and “And Just Like That’s” Cynthia Nixon) and niece Marion Brook (Louisa Jacobson). 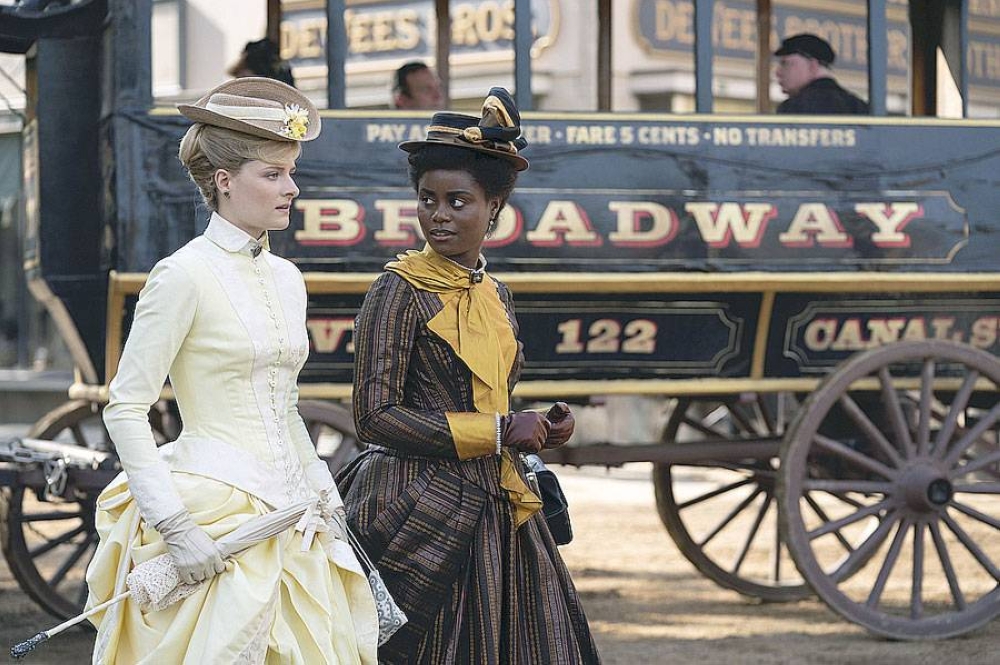 The Russells, George and Bertha (played by Morgan Spector and Carrie Coon), just moved in next door and have made a display of their new wealth in terms of the size and design of their new home. George is a railroad tycoon who has no qualms about being ruthless to anyone who stands in his way; Bertha has her heart and mind set on being a force to reckon with in the city’s topmost social circles. Yet while he may be cutthroat to the competition, he gives his wife a wide berth and steadfast encouragement when it comes to her ambitions.

“The Gilded Age’s” first episode, “Never the New” is set in 1882 in New York City. You can’t talk about this series without mentioning the beloved “Downton Abbey” which ran six seasons. Both shows were created by Julian Fellowes and both shows deal with manners, privilege, and the “upstairs and downstairs” aspect of life in grand estates. I just don’t know if I’ll fall in love with the characters the same way I did with Downton. Maggie Smith’s Cousin Violet is in a league of her own.

While the story deals with fictional characters, you do hear the prominent family names and see actual personalities of the time like Ward McAllister (played by Nathan Lane).

For more of the things that capture our imagination when it comes to The Gilded Age, you can always relish Michelle Pfeiffer, Winona Ryder and Daniel Day Lewis in Martin Scorsese’s 1993 “The Age of Innocence” based on the book by Edith Wharton. You can also pick up the book Vanderbilt: The Rise and Fall of An American Dynasty by Anderson Cooper and Katherine Howe.

Who knows, 2022 might be the year I celebrate the release of “Andor” in front of my computer while wearing a ball gown.

New episodes of The Gilded Age are released every Tuesday on HBO, Downton Abbey is on both HBO Go and Netflix.

Olivia Newton-John, who played Sandy in ‘Grease,’ dies at 73