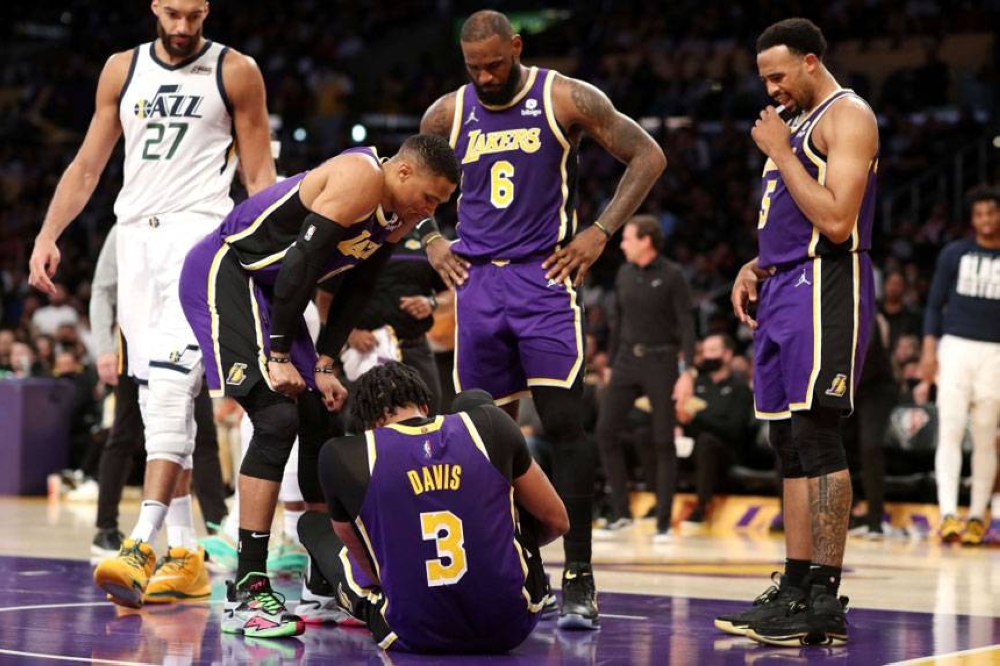 NOT AGAIN Russell Westbrook, LeBron James, and Talen Horton-Tucker of the Los Angeles Lakers check up on teammate Anthony Davis after suffering an ankle injury during the second quarter against the Utah Jazz at Crypto.com Arena on Wednesday, Feb. 16, 2022 (February 17 in Manila) in Los Angeles, California. PHOTO BY KATELYN MULCAHY/AFP

LOS ANGELES: LeBron James scored 15 of his 33 points in the fourth quarter as the Los Angeles Lakers overcame an injury to Anthony Davis and a 12-point, fourth-quarter deficit to beat the Utah Jazz 106-101 on Wednesday (Thursday in Manila).

Los Angeles trailed 92-80 midway through the fourth quarter before it went on a 19-4 run to snap a three-game losing streak. James had the last 10 points during the rally.

Davis was down on the court for several minutes after the injury. The Lakers said an X-ray on Davis' ankle was negative and that he would receive further treatment during the upcoming All-Star break. The Lakers' next game isn't until February 25 against the LA Clippers.

Davis went up to catch a lob pass and came down on Rudy Gobert's heel with 3 minutes remaining in the first half. Davis was unable to put any weight on his right foot and had to be helped off the court by teammates DeAndre Jordan and Dwight Howard into the locker room.

Davis, averaging 23.3 points and 9.1 rebounds, already missed 17 games this season due to a knee injury.

In San Francisco, Monte Morris hit a 3-pointer over Stephen Curry from the right wing as the buzzer sounded and the basket held up on replay review, sending Denver past Golden State.

Curry hit an off-balance 20-foot jumper over Morris moments before and converted the three-point play with 5.9 seconds left to finish with 25 points.

Splash Brother Klay Thompson scored 16 points and Jordan Poole added 15 off the bench as Golden State settled for a 42-17 record going into the All-Star break.

Nikola Jokic had 35 points and 17 rebounds for Denver. It has won three straight and five of six.

In New York, Rookie Cam Thomas led Brooklyn back from a 28-point deficit with 16 of his 21 points in the fourth quarter, stunning New York.

Thomas hit a deep 3-pointer to clinch it with 6.8 records remaining, a shot that had Kevin Durant dancing far off the bench in delight. The Nets didn't have Durant or Kyrie Irving, but it didn't matter with Thomas doing a good impression of either All-Star.

Just 2 for 11 through three quarters, Thomas sparked the 15-0 run in the fourth that gave Brooklyn its first lead of the game with just under 4 minutes remaining.

Seth Curry added 20 points and Andre Drummond grabbed 19 rebounds, most by a Nets player this season, in their second game with the Nets after coming with Ben Simmons in the trade for James Harden.

Simmons also watched from the bench, seeing his new teammates come from 54-26 down in the second quarter to win their second straight after an 11-game losing streak.

Julius Randle had 31 points and 10 rebounds in perhaps the most embarrassing loss of a disappointing season for the Knicks.

DeRozan, who made 16 of 27 field goals, became the first player in NBA history to score 35 or more points and shoot 50 percent or better in seven consecutive games. Chamberlain did it in six straight twice — during the 1960 to 1961 and 1962 to 1963 seasons.

Chicago moved a half-game ahead of Miami for the Eastern Conference lead. Coby White set a season high with 31 points and matched one with six 3-pointers.

De'Aaron Fox led Sacramento with 33 points and nine assists. Domantas Sabonis added 22 points, 12 rebounds and eight assists in his fourth game since a trade from Indiana.