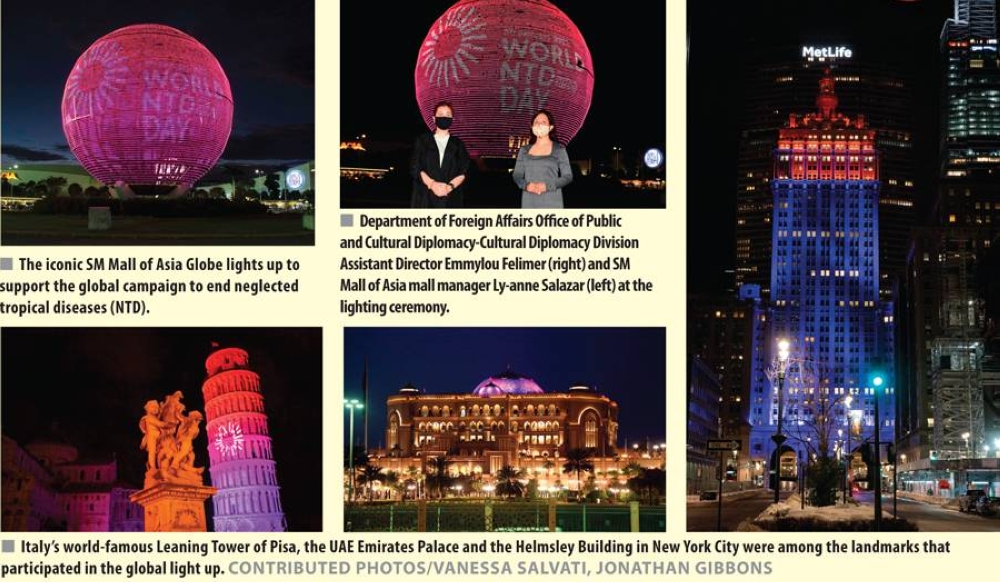 One hundred landmarks in 34 countries, including the iconic SM Mall of Asia Globe in the Philippines, recently lit up for World NTD Day to highlight neglected tropical diseases (NTDs) which affect more than 1.7 billion worldwide, including 1 billion children.

The Great Wall of China, Niagara Falls in Canada, The Colosseum and Leaning Tower of Pisa in Italy, Christ the Redeemer in Brazil, the Carter Presidential Library in the U.S., and the Windmills of Kinderdijk in The Netherlands were among the iconic landmarks that participated in the global light up for the third annual World NTD Day. Several monuments, universities, and notable buildings were also lit up in Abu Dhabi, where World NTD Day was originally announced in 2019.

The 100 “light ups” aim to shine a light on NTDs in support of the World Health Organization's goal to eliminate at least one NTD from 100 endemic countries by 2030. The Philippines is endemic to 6 of the 20 identified NTDs in the world.

NTDs are a group of communicable diseases including dengue, chikungunya, leprosy, rabies, and lymphatic filariasis. While these diseases can debilitate, disfigure, and even be fatal, they are preventable and treatable.

World NTD Day was officially recognized by the WHO in May 2021. The UAE with the commitment of His Highness Sheikh Mohammed bin Zayed, Crown Prince of Abu Dhabi, helmed diplomatic efforts to obtain official recognition of the day, and several WHO member states were instrumental in building consensus to support it.

The World NTD Day light up in the Philippines was held in partnership with the Department of Foreign Affairs, the Philippine Embassy in Abu Dhabi, and SM to help raise awareness on neglected tropical diseases, and support the global call to end NTDs to enable a healthier and brighter future for all.

Keeping Filipinas cool, clean fresh and comfortable at all times

Embracing the art of style