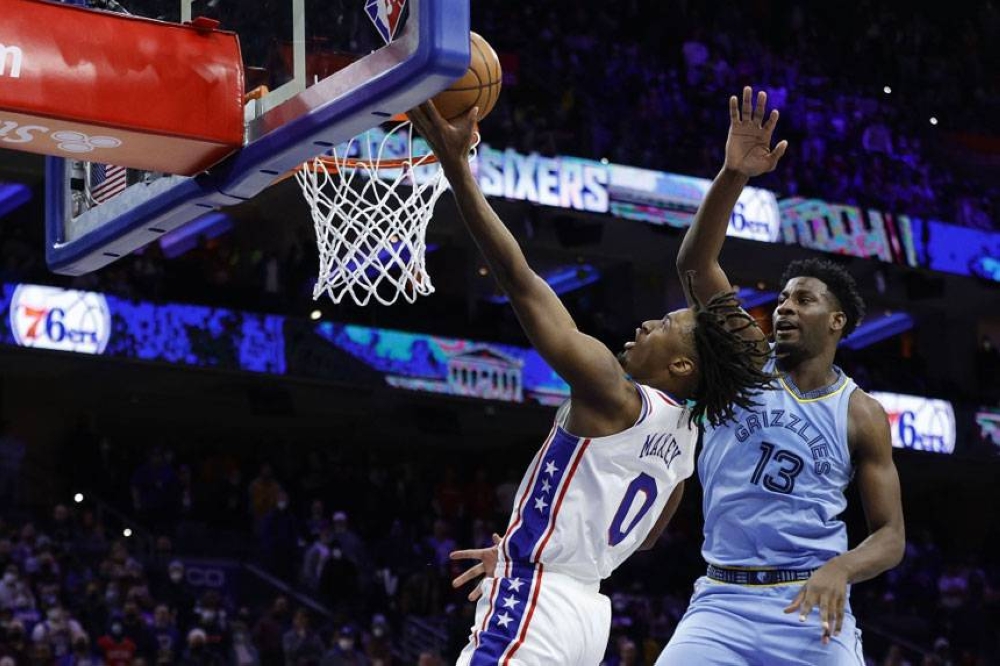 STEPPING UP Tyrese Maxey of the Philadelphia 76ers goes for a layup past Jaren Jackson Jr. of the Memphis Grizzlies during overtime at Wells Fargo Center on Monday, Jan. 31, 2022, in Philadelphia, Pennsylvania (February 1 in Manila). PHOTO BY TIM NWACHUKWU/AFP

LOS ANGELES: Tyrese Maxey and Tobias Harris combined for 64 points as the Philadelphia 76ers won their fifth straight game with a 122-119 overtime victory over the Memphis Grizzlies in a clash between two of the hottest teams in the NBA on Monday (Tuesday in Manila).

Maxey scored 33 points and Harris finished with 31 points for the Sixers, who won despite being without their leading scorer Joel Embiid.

Maxey, who also had eight assists and four blocked shots, scored the go-ahead basket with 26 seconds left in the fourth quarter in front of a crowd of 20,400 at the Wells Fargo Center in Philadelphia.

Ja Morant led the Grizzlies with 37 points and Desmond Bane added 34, including five points in overtime.

The Sixers and the Grizzlies have been two of the best teams in the league since Christmas.

Embiid has been the catalyst for Philadelphia during the surge which has seen them win 15 of their last 18 games.

He did not play against Memphis because the team wanted to give him the night off.

Tobias Harris produced 31 points and Andre Drummond had 16 points and 23 rebounds in the win.

The Grizzlies have won 12 of 15 in January, but their difficult schedule finally caught up with them against the Sixers.

Elsewhere, Stephen Curry scored 40 points, including 21 in the final quarter, as the Golden State Warriors won their sixth straight contest with a 122-108 blowout victory over the mistake-prone Houston Rockets.

Curry also had nine assists and five rebounds and made seven three pointers en route to posting his sixth 40-point game of the season.

Andrew Wiggins had 23 points for Golden State who shot 53.8 percent from the floor and 42.5 percent from beyond the arc.

The Warriors sent Houston to their fourth consecutive loss and 11th straight defeat on their home court.

Curry carried the offensive load in the fourth, shooting seven-of-10 from the field and four-of-seven from three point range. Wiggins grabbed five rebounds and shot eight of 14 in the win.

In Boston, Jaylen Brown scored a game-high 29 points and Jayson Tatum contributed 20 points and 12 rebounds as the Boston Celtics thrashed the Miami Heat 122-92.

Marcus Smart added 16 points and seven assists and Al Horford contributed 14 points and nine boards for the Celtics, who have beaten the Heat twice this season.

Miami struggled to score with forward Jimmy Butler out due to a right toe injury.