Robredo’s presidential bid gets support of over 100 Filipino economists 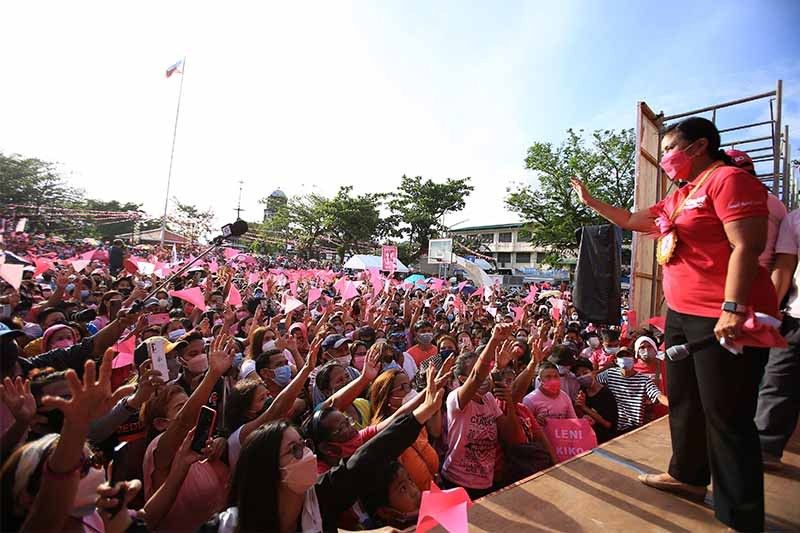 MANILA, Philippines — More than 100 Filipino economists are backing the candidacy of Vice President Leni Robredo in the 2022 national elections.

As of Friday, a total of 137 economists, including former central bankers and chiefs of the National Economic Development Authority, the state's top socioeconomic planning agency, signified their support for the presidential campaign of Robredo, an economics graduate herself.

“We believe that VP Leni Robredo is our best hope to turn the tide and bring back the people’s trust in government in order to restore and sustain vigor to people’s lives and livelihoods at the soonest possible time,” they said in a statement.

“Robredo brings to table a solid economics and legal background which will be necessary for crafting policies to accelerate economic recovery,” they added.

Among the signatories are former NEDA chiefs Winnie Monsod, Cielito Habito, Dante Canlas, Emmanuel Esguerra and Ernesto Pernia, who served as President Rodrigo Duterte's top socioeconomic planner for four years. At the onset of the pandemic in 2020, Pernia left NEDA due to personal reasons “and partly to differences in development philosophy with a few of my fellow Cabinet members" amid the health crisis.

The Filipino economists stressed that the government’s role is crucial at this time when the country is struggling to recover from the deepest economic crisis since the 1980s.

“We are convinced that only a competent leadership can restore the people’s trust and confidence in government enabling it to effectively preside over the collective effort of economic recovery in the wake of the pandemic,” they added.

The economists noted that Robredo’s concern for the marginalized and her work as human rights lawyer will also bring back the people’s trust in government and make sure the economic recovery plan is inclusive.

They also noted Robredo’s track record as shown in the Office of the Vice President’s pandemic response programs and proposed COVID-19 recovery plan, which provides strategies to address related issues such as lack of jobs, record hunger and need to beef up economic and education aid.

“Bad governance is a poison that kills both lives and livelihoods. The pandemic made that clear. Robredo’s brand of good governance is the antidote this country needs in order to build back better from the twin crises plaguing our health and economy exacting a huge toll on the different sectors of the country,” the economists added.

Japanese investment bank Nomura said in a commentary last month that Robredo will be a more “market-friendly” president than her main rival Ferdinand Marcos Jr., arguing that " (a) Marcos victory will likely be viewed negatively owing to perceptions against him, in part because his candidacy is facing some petitions for disqualification on grounds of making false statements and a previous conviction of failing to file income tax returns."