With COVID exiting, a looming war in Europe 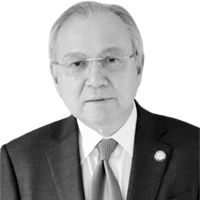 What is happening in the world? What is God trying to tell us?”

These were the questions asked by one respected preacher to his congregation, referring to the pandemic and a looming potential war in Eastern Europe. Some even liken the situation to the beginnings of a Third World War or worse, the end of the world. Analysts and experts have been warning that any geopolitical conflict – in this instance the possibility of Russia invading Ukraine – will affect global markets and strain the economy that has already been battered by the COVID-19 pandemic.

As the largest country in the world in terms of landmass, Russia – described as a commodities giant – has massive natural resources such as oil and various minerals. It is the third biggest oil producer in the world and the second largest global producer of natural gas, accounting for almost 17 percent of supply in 2020, according to reports.

Although it is Europe that is heavily dependent on Russia for oil and natural gas, the Ukraine crisis is causing oil prices to become very volatile across the globe. The pandemic has already caused prices to steadily go up in the past few months, but an escalation of the conflict could disrupt world supply and cause prices to go off the roof. As a consequence, transportation costs could also climb, making it even more difficult for businesses – in particular the small ones just starting to operate again – to recoup their losses in the past two years. Tourism, which is just beginning to recover with countries deciding to reopen their borders, will also feel the impact. These added costs would, in one way or another, be passed on to consumers.

Russia is the biggest exporter of wheat while Ukraine is also a major exporter, that’s why a disruption could trigger an increase in the price of flour, bread and other similar food products. Many countries including the Philippines also buy wheat from both Russia and Ukraine, with Egypt, Turkey and Bangladesh buying up more than half of Russia’s wheat in 2019, according to reports. Corn prices could also jump since Ukraine is also a big exporter of corn, and all of this would really be unfortunate at this time because food prices are already high due to inflation.

While Russia says it is ready for talks to de-escalate the tension, Ukraine has accused Russia of provocation amid reports that pro-Russian forces have shelled several settlements, including a kindergarten in the eastern part of the country. In a statement released on social media, the Ukrainian Joint Defense Forces Operation said that a total of 32 shells were fired in the Donbas region, injuring civilian and military personnel and damaging kindergartens as well as communal infrastructure, with half of the village left with no electricity. Russia, on the other hand, had accused Ukraine earlier of shelling territory held by pro-Russia separatists.

Amid the tension, several nations are already recalling non-essential personnel from their embassies in Ukraine. There are about 380 Filipinos in Ukraine, and Foreign Secretary Teddy Locsin had personally given his assurance that no harm will come to them. The DFA is already coordinating with the European Union for the safe passage of Filipinos across European borders as the situation is volatile and “security conditions could change at any moment.”

I came across an article from The Economist that said “war would do far greater harm to Russia than the threat of war. The West would be more galvanized and more determined to turn its back on Russian gas; Ukraine would become a running sore, bleeding Russia of money and men, and Mr. Putin would become a pariah.”

While “Ukraine has indeed suffered” and “having been neglected in recent years, Ukraine is enjoying the West’s unprecedented diplomatic and military support. Those bonds, forged in crisis, will not suddenly dissolve if Russian forces pull back. Again, it is the opposite of what Mr. Putin wanted,” the article said.

With the global economy still fragile, the last thing the world needs is another war.

At the opening of the G20 finance leaders’ meeting in Jakarta last Thursday, Indonesian president Joko Widodo expressed what the rest of the world is most likely thinking, that “this is not the time for rivalries and creating new tensions that disrupt the global recovery, especially one that endangers the safety of the world like what is happening in Ukraine now.”

President Widodo warned: “The winter is coming,” adding that “the pandemic is far from over, and the global economy is struggling. During this situation, no single country could recover alone. All countries are interconnected, no one is isolated.”

There is only one way and that is through diplomacy. Both US president Joe Biden and French president Emmanuel Macron have “affirmed their continued support for a diplomatic path forward,” the White House said.

The other day, a deeply religious friend called me and said that what is happening in the world right now – the COVID-19 pandemic, the tension in Ukraine, the situation involving China and Taiwan and the devastating natural disasters that have been occurring – are written in the Bible as the “signs of the beginning of the end of times.” He quoted biblical passages about wars and rumors of wars, and nations rising against nations, kingdoms against kingdoms, as well as famines and earthquakes in many places.

My deeply religious friend concluded that now more than ever, we must put our faith in God because “He is our great refuge and strength in times of trouble.” — Ambassador B. Romualdez

Can we win in the e-sabong game?