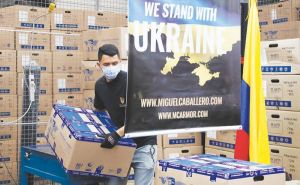 FAR-REACHING EFFECT An employee of MC Armor arranges boxes with ballistic protection gear to be exported to Ukraine, from the company’s factory in Cota, near Bogota, on Thursday, March 24, 2022 (March 25 in Manila). Colombian entrepreneur Miguel Caballero’s company supplies ballistic protection gear to private organizations and the government in Ukraine, where demand has dramatically increased after Russia invaded Ukraine over a month ago. AFP PHOTO

HONG KONG: Markets fluctuated in Asia on Friday as traders struggled to build on a rally in New York, with focus on the impact of the Ukraine war, surging inflation and Federal Reserve plans to fight it.

The crisis in Eastern Europe has forced investors to reassess their outlook for the global economy owing to an expected surge in already soaring prices, which some commentators now warn could lead to recessions and stagflation.

Another rally on tech firms helped Wall Street clock up more healthy gains as data showed filings for US unemployment benefits hit their lowest level since September 1969, while a gauge of business activity hit an eight-month high in March.

That came even as speculation swirls that the Fed will turn even more hawkish in its drive to rein in inflation. Tech firms are more susceptible to higher borrowing costs.

Meanwhile, the White House warned it was concerned that Russian President Vladimir Putin could lash out using chemical, biological or even nuclear weapons as he grows increasingly frustrated about his campaign in Ukraine being bogged down.

Still, analysts said the gain on US markets could be attributed to the united front presented in Brussels against Putin by NATO (North Atlantic Treaty Organization), the G7 (Group of Seven) and European Union, and hope that a ceasefire can be reached.

The groups unveiled a series of fresh sanctions against Moscow over its invasion, though European nations did not announce a ban on imports of Russian oil, which helped push crude lower on Thursday. Both main contracts were flat in Friday trade.

Still, the commodity remains elevated and analysts warned it could spike at any time.

“But the fact that oil is only trading a few dollars more down suggests the EU embargo was always a low-probability outcome. Still, it's tough to be short of oil as US inventories continue to dwindle as we are bound to have more supply shocks in the future.”

A move to restrict Moscow's ability to use the Russian central bank's gold reserves to circumvent Western sanctions sent the yellow metal up sharply.

Equity markets in Asia were mixed in early trade.

2022-03-25
AtinitoAdmin
Share
Previous Watsons promotes sustainable health, beauty, and wellness through Do Good campaign
Next Next president seen to zero in on growth