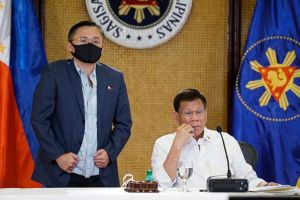 SEN. Christopher Lawrence “Bong” Go said that President Rodrigo Duterte will exhaust all means to make the May 9 elections peaceful and credible.

“Sabi niya, sisikapin niya na maging malinis at credible ang eleksyon na ito. Inatasan na niya ang militar at pulis during his previous meetings na dapat maging credible ang eleksyon na ito at malinis (He said he will do his best to make this election clean and credible. He already ordered the military and the police to ensure that this election is credible and clean),” Go said in a chance interview during the ceremonial turnover of the P450-million financial assistance to the Southern Philippines Medical Center in Davao City on March 14.

“Sabi naman ni Pangulo [noong Biyernes na] hindi naman niya ma-aassure … pero sisikapin niya na walang magiging takutan, paghahasik [ng lagim ng] mga kandidato. Dapat patas po ang lahat (The President on Friday said that while he cannot give total assurance, he will do his best to ensure that no one will be able to sow terror. Everything has to be fair),” he added.

The President earlier said there were intelligence reports that insurgent groups were working with some candidates to undermine the elections. He reiterated that he would not tolerate any form of violence and disorderly conduct during the May 9 polls.

Go underscored the responsibility of political candidates to abide by the law as he urged them to reaffirm their commitment to a peaceful and honest election.

The senator called on Filipinos to exercise their right to vote without fear, assuring them that the Senate will remain vigilant against any scheme to disrupt the May 9 elections.