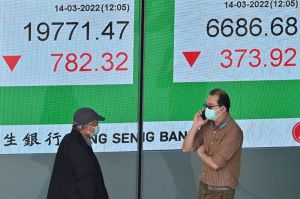 SLIPPING SHARES People walk past a sign showing the numbers for the Hang Seng Index as shares fell in early trading in Hong Kong on Monday, March 14, 2022. AFP PHOTO

HONG KONG: Asian markets mostly fell on Monday as traders tracked developments in the Ukraine war and diplomatic efforts to bring the conflict to an end while Hong Kong took a pounding after China placed Shenzhen under lockdown, fueling a rout in the technology sector.

Oil prices dropped, providing some respite after they soared to a near 14-year high last week, though the commodity remains elevated at around $110 and keeping upward pressure on inflation.

Trading floors continue to be awash with uncertainty as Russia’s invasion of Ukraine rages, with comments from President Vladimir Putin that there were “positive developments” in talks with Kyiv unable to provide much support.

United States National Security Adviser Jake Sullivan was due to meet senior Chinese diplomat Yang Jiechi in Rome on Monday, with Ukraine at the top of the agenda as the White House seeks help in bringing the war to a swift conclusion.

Beijing has declined to directly condemn Moscow for launching its invasion and has repeatedly blamed the North Atlantic Treaty Organization’s (NATO) “eastward expansion” for worsening tensions between Russia and Ukraine, echoing the Kremlin’s prime security grievance.

Investors are also nervously awaiting the Federal Reserve’s (Fed) latest monetary policy gathering, which is expected to end on Wednesday with the US central bank announcing a quarter-point interest rate hike.

The Fed is trying to walk a fine line between trying to rein in runaway inflation and support the world’s biggest economy in the face of the war, which many fear could lead to another recession.

“We are experiencing extraordinary volatility in global equities, compounded by wavering market sentiment, and the risk of recession intensifies on spiraling commodity prices,” Louise Dudley at Federated Hermes said.

“We expect ongoing swings in the short term as geopolitical uncertainty over Russian crude persists,” she added.

The prospect of higher borrowing costs has seen the dollar rally across the board, hitting multiyear highs against the yen, pound and euro.

After another drop on Wall Street, Asia struggled.

Hong Kong tanked by 5 percent and the Hang Seng Tech Index was slammed around 11 percent, with market heavyweights Alibaba and Tencent also each losing around a 10th of their value.

The selling came after news broke on Sunday that China had placed all 17 million residents of Shenzhen under lockdown as it battles a flareup of coronavirus cases across the country.

Public transport has been suspended and officials have told all residents to stay at home, with the lockdown set to last until March 20 while three rounds of mass testing are carried out. The move has led Foxconn, a key supplier for Apple and maker of iPhones, to halt operations in the city.

The news compounded problems for China’s tech industry, which has been under increasing pressure from Beijing’s regulatory crackdown on the private sector.

Chinese firms listed in the United States were hammered last week on concerns about a crackdown by authorities there.

“At this stage, we still see the technology space as very vulnerable,” said Jun Li of Power Pacific Investment Management. “It is very difficult to evaluate the risk profile at this stage.”

Oil prices slipped despite strict sanctions on Russia that have seen Washington ban its crude imports, and following the announcement of a pause in negotiations to restore the 2015 nuclear agreement between Iran and world powers.

The news comes just as it appeared a deal was close, which would have allowed Tehran to sell its crude on world markets again, easing a supply crisis.

The setback came after Russia said it was demanding guarantees that the Western sanctions imposed on its economy following its invasion of Ukraine would not affect its trade with Iran.

Pay your cellphone bill with a credit card? You could soon face a new fee for that

US inflation cooled to 8.5% in July

McDonald’s will soon reopen its locations in Ukraine

Cineplex Inc. says it generated positive net income for the first time since the start …