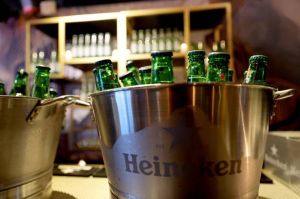 THE HAGUE, The Netherlands: Dutch brewer Heineken, Danish beermaker Carlsberg and the Universal Music Group are some of the latest Western companies to halt operations in Russia over Moscow’s invasion of Ukraine.

This came as Japanese gaming giants PlayStation and Nintendo announced on Thursday they would also suspend shipments to Russia, joining the hundreds of multinational firms who have taken action.

Heineken, the world’s second-biggest beer company, said on Wednesday it was stopping the production, advertising and sale of its namesake brand in Russia “in response to the continued escalation of the war.” This followed its suspension of new investments and exports to Russia last week.

“We are shocked and saddened to watch the tragedy in Ukraine unfold,” Dolf van den Brink, Heineken chief executive officer, said in a statement. “The Russian government’s war against Ukraine is an unprovoked and completely unjustified attack.”

Heineken employs 1,800 people in Russia and says it is the third-largest brewer in the country, where it makes the Zhigulevskoe and Oxota brands for the local market.

The brewer said it would take “immediate steps to ring-fence” its Russian business from the rest of its global operations “to stop the flow of monies, royalties and dividends out of Russia.”

Heineken’s other famous brands include Amstel, Tiger and Strongbow cider.

Danish brewer Carlsberg, the world’s fourth-largest beer producer, said it, too, was halting production and sales in Russia.

It said Baltika Breweries, which it majority owns, would continue to operate as a separate business to sustain its 8,400 employees in Russia “who are not responsible for the actions of the government.”

The Danish group said that during the humanitarian crisis in Ukraine, any profit generated by its business in Russia would be donated to relief organizations.

Sony Group, which owns PlayStation, said in a Thursday statement that its video game unit “joins the global community in calling for peace in Ukraine” as it announced it had suspended operations in Russia.

The tech and entertainment conglomerate also said it was donating $2 million to the United Nations refugee agency and Save the Children “to support the victims of this tragedy.”

A Nintendo spokesman told Agence France-Presse it would suspend shipments to Russia “for the time being” for logistical reasons.

According to Yale University researchers, about 300 companies have announced their withdrawal from Russia since it invaded Ukraine on February 24.

McDonald’s, Coca-Cola and Starbucks joined the crowd on Tuesday following public pressure to do so.

Also on Tuesday, Universal Music Group, the world’s biggest label, said it was suspending all operations and closing its offices in Russia effective immediately.

“We urge an end to the violence in Ukraine as soon as possible,” Universal said in a statement.

“We are adhering to international sanctions and, along with our employees and artists, have been working with groups from a range of countries… to support humanitarian relief efforts to bring urgent aid to refugees in the region,” it added.