Puerto Princesa gears up for Ironman 70.3 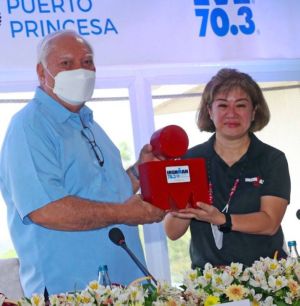 IT took some time but the Ironman 70.3 triathlon race will finally land in Puerto Princesa, Palawan on November 13.

Princess Galura, president and general manager of the Ironman Group Philippines, officially launched the event in a press conference at the Puerto Princesa City Hall on Sunday.

“We've been preparing for this for so long. It should have been held in 2020, then was moved to 2021, and now 2022. Now that there's so many racers who weren't able to race for two years, they're itching to finally race. Today at 8 a.m., the Ironman launches this globally, the new race in Asia, the Ironman 70.3 in Puerto Princesa,” Galura said.

The registration for the event opens worldwide on March 30, with the organizers expecting 1,600 slots to be filled by triathletes.

The 21.1km (13.1-mile) run will take athletes along the bay to the city center, allowing athletes to enjoy some of the best scenery before their Ironman 70.3 finish line in the Ramon Mitra Jr. Sports Complex.

Other than the individual race, there will also be a relay race where participating teams can have different individuals racing in swimming, cycling and running. Men, women and mixed are the divisions of the event.

While the Covid-19 restrictions in Puerto Princesa and Palawan are generally relaxed, there's no assurance that it will stay the same come the race in November. The Ironman Group is confident, however, that the event will push through even if Puerto Princesa reaches Alert Level 3 due to the protocols it set in place.

“The protocols that Ironman set forth worldwide were able to deliver races even during the pandemic in 2020 and 2021. In fact in 2021, over 150 races worldwide had been staged at various alert levels all over the world.

“I'm confident that our race will go ahead even on higher alert levels because first, it's outdoors, second, our race is by nature, socially distanced. In swimming, there's already separation because each participant will be fired every five seconds. In cycling, there's a drafting distance of 12 meters. In running, people are also allowed to wear masks if they choose to.”