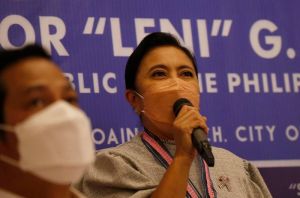 VICE President Maria Leonor “Leni” Robredo said she will never form a coalition government with the Communist Party of the Philippines-New People’s Army-National Democratic Front (CPP-NPA-NDF) if she wins the presidency.

Robredo was reacting to text messages attributed to her describing CPP founder Jose Maria “Joma” Sison as “a true patriot of the country. I will make sure he will finally return home this year if I win. He deserves to be named a national hero.” She said the messages were sent Sunday “red-tagging” her and her campaign volunteers.

The messages were all fake, Robredo said.

“Once and for all: Kaliwa, kanan, taas, baba, lahat handa tayong pakinggan — basta tapat, mapayapa at handang magtrabaho para iangat ang buhay ng Pilipino (Once and for all: Left, right, up, down, we are willing to listen to all — as long as they are honest, peaceful and willing to work to uplift the lives of Filipinos),” she said.

She said that those who really know her know that she does not believe in violence in solving any problem, and that she will never form an alliance with those who espouse violence.

“Alam ‘yan ng lahat ng katrabaho ko, kasama na ang mga nasa uniformed services, na mukhang sila ang tinatarget ng mga ganitong disinformation at propaganda. Kaya pwede ba. Gusto n’yong pigilin ang momentum ng People’s Campaign? Try harder. O better yet: Sumali na lang kaya kayo? Ipanalo na natin ‘to (All my colleagues know that, including those in the uniformed services who seem to be the target of disinformation like these and propaganda. So please. You want to stop the momentum of the People’s Campaign? Try harder. Or better yet: Why don’t you join us? Let’s win this),” Robredo said.

Trillanes said the NTF-Elcac’s source1s were wrong. “This is nothing but fake news propagated by individuals in their desperate attempt to stop the overwhelming political tide of support for VP Leni,” Trillanes wrote.

On Sunday, he challenged President Rodrigo Duterte and presidential candidate Sen. Panfilo “Ping” Lacson to name the communists that are part of the campaign team of the vice president.

Trillanes is a member of Robredo’s senatorial ticket. — with Aric John Sy Cua