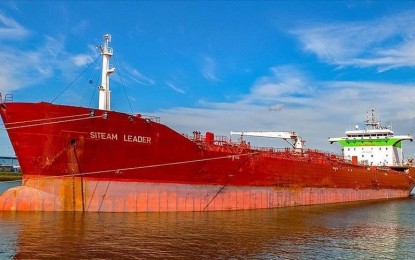 ANKARA — The United States (US) is poised to become the world’s largest liquefied natural gas (LNG) exporter by the end of this year, with the expansion of its LNG infrastructure.

According to information compiled by the Anadolu Agency from Shell, the International Gas Association, and the US Energy Information Administration (EIA), the US currently ranks as the third-largest LNG exporter with exports of 75 million tons last year.

The US’ rise to third place was made in just four years.

In its latest report, published in December 2021, the EIA said the US first started exporting LNG in February 2016 and became the third-largest LNG exporter in 2020.

With just six operational terminals currently, the EIA said new terminals will be active by the end of the year to allow the US to “have the largest LNG export capacity in the world.”

The US has been investing heavily in its LNG infrastructure and is now considered a country with the capacity to meet the growing natural gas needs of Asia and Europe.

The US exports nearly 45 percent of its exports to Asia, 41 percent to Europe, and the remainder to the Americas.

The upward demand trend for LNG on global markets is forecast to continue into 2022 when a new demand record is expected.

According to the EIA’s report, the US will be able to meet 22 percent of the world’s LNG demand alone by the end of 2022.

Although the US is expected to maintain its leading position as an LNG exporter up until 2025, it is not alone in its ambitious investments in the sector.

Qatar is also investing and is forecast to take the lead in 2025.

The US became Europe’s largest source of LNG, supplying 26 percent of all LNG imported by EU member states and the UK in 2021. Qatar followed with 24 percent and Russia with 20 percent.

Last year saw the US ramp up its LNG exports the most, with a rise of nearly 25 million tons.

Cove Point, constructed in 2018, has an annual liquefaction capacity of 5.25 million tons.

The first unit of the Cameron LNG terminal, which has an annual liquefaction capacity of 4 million tons, became active in 2019. The second and third trains were built in 2020 with a total capacity of 8 million tons.

New LNG terminals will be commissioned

More terminal expansions and new terminals are on the cards so the US can consolidate its position in the global LNG market.

The Calcasieu Pass terminal, with an annual liquefaction capacity of 10 million tons, will start operations in Louisiana by the end of this year.

A new terminal at the Sabine Pass, with a capacity of 5 million will be put into service in 2023 and the Golden Pass LNG terminal will become active in 2025.

Of the more than 160 LNG facilities operating in the US, some export natural gas from the US, some supply natural gas to the interstate pipeline system or local distribution companies, and others are used to store natural gas during peak demand periods. Facilities producing LNG for vehicle fuel or industrial use are also located in the country.

According to data from FERC, the independent federal agency that regulates energy markets in the US, 13 LNG terminals have been approved for construction.

Will US LNG replace Russian gas?

About one-third of the gas consumed in Europe comes from Russia. However, natural gas from Russia’s energy giant Gazprom to EU countries in January decreased 40 percent to 5.8 million tons.

Furthermore, about 4.5 million tons of LNG were exported from the US to Europe in January, demonstrating that US gas exports could account for 70-80 percent of Russia’s deliveries to Europe.

If last year is taken as a base, the data shows that the US could meet the equivalent of roughly 40 percent of the gas that Russia sends to Europe.

According to research firm Rystad Energy, the total capacity of facilities under design or construction in the US this year also strengthens the US’ position.

US monthly natural gas production in the second half of 2019 recorded record-high levels.

Regardless, LNG facilities take three to four years to build, meaning the earliest date for LNG transit with new capacity from the US to Europe is 2025.

If the supply side cannot meet new demand, especially from Asia, the decrease in gas stocks in Europe this winter will filter out globally and a worldwide battle for LNG may ensue.

A taste of this competition was experienced when 11 US senators urged Energy Minister Jennifer Granholm to “take quick action to limit US natural gas exports” in a letter dated February 3.

The US’ efforts to supply gas to Europe instead of Russian resources are reducing market pressure exerted by Russian President Vladimir Putin.

US President Joe Biden’s efforts to find LNG beyond what the US can provide for Europe, meeting with the Emir of Qatar, and convincing Japan to divert some of the LNG to Europe have been among the important developments in recent months. (Anadolu)