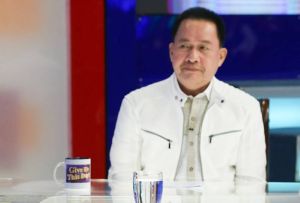 ONE of nine people who was indicted for her involvement in fraud, along with a Mindanao-based church leader and supporter of President Rodrigo Duterte, has pleaded guilty, according to a statement from the US Attorney’s Office in the Central District of California that was posted on the US Department of Justice website on Friday.

Maria de Leon, 73, a Filipino American, has admitted to her role in “preparing and filing fraudulent documents” that would grant US residency and citizenship to members of the Kingdom of Jesus Christ (KOJC), which is headed by Pastor Apollo Quiboloy.

“In a plea agreement filed today (Saturday in Manila) in United States District Court, Maria De Leon, 73, a resident of the Koreatown neighborhood of Los Angeles and the owner of Liberty Legal Document Services, agreed to plead guilty to participating in a scheme with administrators of the church, which is known as the Kingdom of Jesus Christ, The Name Above Every Name,” according to the statement.

De Leon, a paralegal based in Los Angeles, agreed to cooperate with the US government’s case and has also admitted “in the plea agreement to participating for about eight years in the conspiracy to commit marriage fraud and visa fraud with the leaders of the KOJC.”

“De Leon admitted to submitting fraudulent ‘Petitions for Alien Relative’ and related paperwork on behalf of KOJC members knowing or believing that the marriages were arranged for purposes of securing favorable immigration status for a spouse,” it said.

De Leon was among nine people, including Quiboloy, who was charged last November in a labor-trafficking scheme that used fake visas to bring church members to the US where they were forced to donate to the Children’s Joy Foundation (CJF), based in Glendale.

“Members who proved successful at soliciting for the KOJC were forced to enter into sham marriages or obtain fraudulent student visas to acquire legal status in the United States so they could continue soliciting donations, the indictment alleges,” the US Department of Justice said in the same statement.

Quoting the indictment, the US Department of Justice said that many of the workers were “moved around the United States to solicit donations as CJF ‘volunteers,’ who were also called Full Time Miracle Workers.”

The US Department of Justice also indicated that the case of fraud filed against Quiboloy, de Leon and their accomplices was a “superseding indictment” that is linked to the sex trafficking scheme also involving the influential pastor.

De Leon is one of six defendants who have been arrested while five others who appeared at a federal court in Los Angeles are set to be tried in March next year.

Quiboloy, who remains at large, is believed to still be in the Philippines, according to the US Justice department.

A California court will hear de Leon in order for her to plead guilty to the count of conspiracy, in which she will be sentenced to a maximum of five years at a US federal prison.