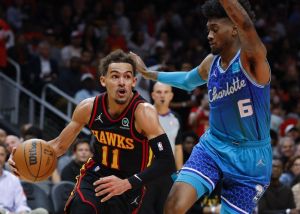 STILL BREATHING Trae Young (11) of the Atlanta Hawks tries to get past Jalen McDaniels (6) of the Charlotte Hornets during the second half at State Farm Arena on Wednesday, April 13, 2022, (April 14 in Manila) in Atlanta, Georgia. PHOTO BY TODD KIRKLAND/AFP

ATLANTA: Trae Young bounced back from a sluggish start to score 24 points and De'Andre Hunter led a third-quarter surge that carried the Atlanta Hawks to a 132-103 rout of the Charlotte Hornets in an Eastern Conference play-in game Wednesday (Thursday in Manila).

The Hawks, who finished ninth in the East after a surprising run to the conference final a year ago, will travel to Cleveland to face the Cavaliers on Friday (Saturday).

The winner claims the No. 8 seed in the East and will face the top-seeded Miami Heat in the opening round of the playoffs.

The season is over for the Hornets, who were overwhelmed in the 9-10 play-in game for the second year in a row and haven't made the playoffs since 2016.

All five Atlanta starters scored in double figures, as did Bogdan Bogdanovic off the bench.

It was Hunter who came up big in the decisive third period, bursting out with 16 points after being held to 3 in the first half. Hunter finished with 22 points, while Danilo Gallinari added 18 and Clint Capela 15.

Kevin Huerter and Bogdanovic each had 13.

LaMelo Ball led Charlotte with 26 points on 7-of-25 shooting.

In New Orleans, CJ McCollum scored 27 of his 32 points in the first half, Brandon Ingram shook foul trouble to add 27 points and New Orleans beat San Antonio in a Western Conference play-in game.

The Pelicans, who finished ninth in the West after starting the season 3-16, will play at the Los Angeles Clippers on Friday night, with the winner getting the eighth seed and a spot against the top-seeded Phoenix Suns in the first round.

The Pelicans seemed headed to a rout, leading 96-75, with 10:39 left, but the 10th-seeded Spurs used a 16-1 run over the next 5:25 to cut it to 97-91. The Pelicans missed seven consecutive shots during the run. Ingram put a pair of soft jumpers in the lane and Jonas Valanciunas added a short jumper to put New Orleans back on top, 103-91.

Valaciunas had 22 points and 14 rebounds.

While Pelicans forward Zion Williamson missed the entire regular season with a fractured right metatarsal, the former No. 1 overall pick was doing 360-degree dunks in pregame before sliding back into his street clothes. Coach Willie Green said he was not looking for Williamson to return until the beginning of next season.

2022-04-13
AtinitoAdmin
Share
Previous Program for chronically ill Ontarians shuts down after province fails to renew funding
Next After a two-year drought, Toronto’s elite finds social sustenance at the Biblio Bash