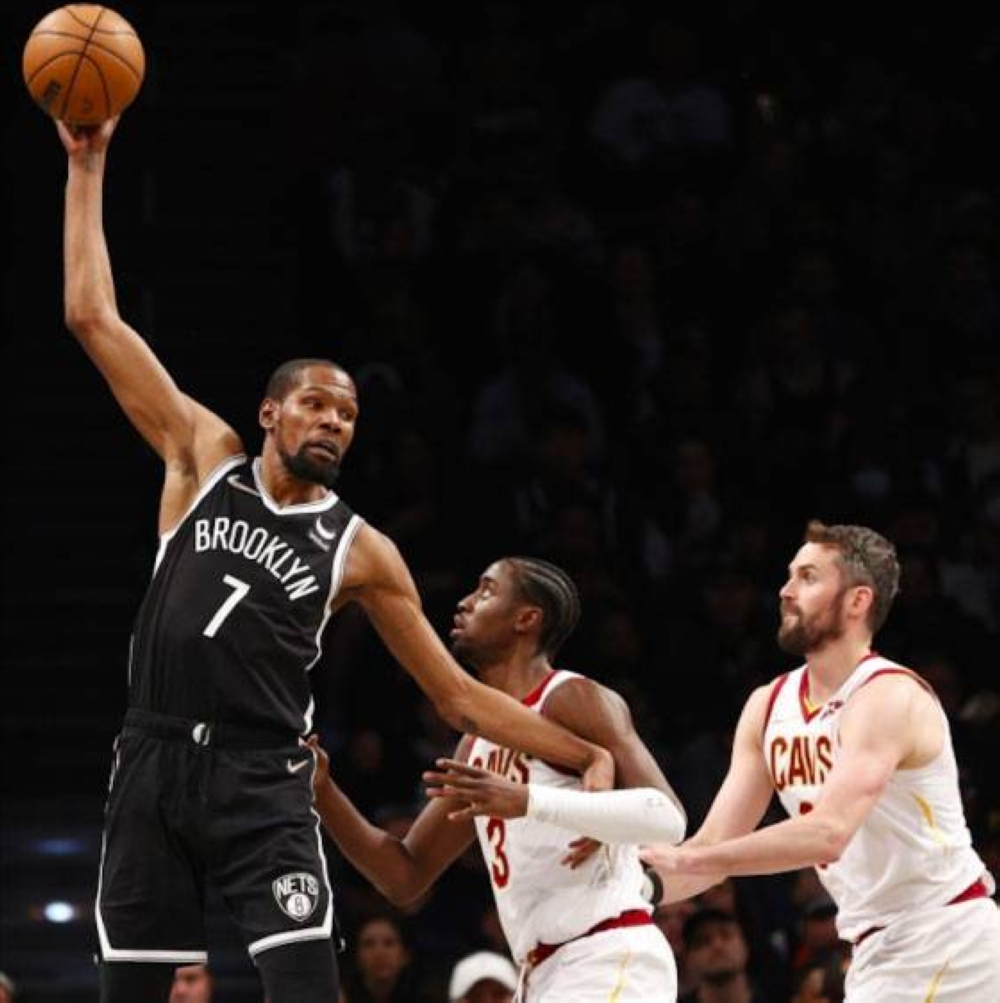 Kevin Durant (No. 7) of the Brooklyn Nets catches a pass as Caris LeVert and Kevin Love of the Cleveland Cavaliers defend during the second half of the Eastern Conference 2022 Play-In Tournament at Barclays Center on Tuesday, April 12, 2022, (April 13 in Manila) in the Brooklyn borough of New York City. AFP PHOTO

NEW YORK: Kyrie Irving produced a near-flawless display of shooting to fire the Brooklyn Nets into the NBA playoffs on Tuesday (Wednesday in Manila) with a 115-108 victory over the Cleveland Cavaliers.

Irving drained 12 of 15 from the field to finish with 34 points and 12 assists for a victory that sees Brooklyn into a best-of-seven series against the second-seeded Boston Celtics, starting Sunday.

On the evidence of Tuesday's performance, Irving will be brimming with confidence as he prepares to face his former club in Boston this weekend.

The 30-year-old seven-time All-Star was perfect from the field through the first three quarters, only missing his first shot early in the fourth quarter.

It was the latest in a series of impressive displays from the unvaccinated Irving, who was ruled out of the vast majority of Brooklyn's home games this season due to Covid-19 regulations in New York.

“We only speak positivity on this entire journey thus far,” Irving said after Tuesday's win. “It's been ups and it's been downs, but we've stayed together, remained resilient.

“We've been through a lot of changes and we've evolved since we came out of the All-Star break. It feels good but we know that the job isn't finished.”

Irving was backed by another commanding display from Kevin Durant, who finished with 25 points, 11 assists and five rebounds.

Durant was a composed presence throughout, notably helping Brooklyn re-establish a 10-point cushion with back-to-back buckets after Cleveland — who at one stage had trailed by 22 points — cut the Nets' lead to just six points late in the fourth quarter.

Brooklyn led from start to finish, exploding out of the blocks to score 40 points in the first quarter to open up a 20-point lead that Cleveland never managed to recover from.

Nash however was satisfied that Brooklyn had been able to close out the win as Cleveland chipped away at the lead.

While the Nets look forward to the playoffs, the Cavaliers will face the winner of the other Eastern Conference play-in game between the Charlotte Hornets and Atlanta Hawks for a place in the first round of the postseason.

In Tuesday's (Wednesday in Manila) other play-in game, Anthony Edwards and D'Angelo Russell led the Minnesota Timberwolves to a hard-fought victory over the Los Angeles Clippers to clinch the seventh seed in the Western Conference.

Edwards scored 30 points and Russell added 29 as the Wolves won 109-104 to set up a first round playoff series against the second-seeded Memphis Grizzlies.

A pulsating clash at Minneapolis's Target Center was briefly interrupted in the second quarter after a woman reported to be an animal rights activist attempted to glue herself to the court in protest. Security staff removed the woman after a few minutes.

Minnesota's victory came despite a poor performance from star center Karl-Anthony Towns, who fouled out early in the fourth quarter after scoring just 11 points with three assists and five rebounds.

Towns' departure was the cue for a dramatic late rally from Minnesota, however, with the Timberwolves going on a 13-2 run to take the lead that ultimately proved the difference.

Russell, meanwhile, had words of support for Towns, who struggled to impose himself against a hard-nosed Clippers defense.