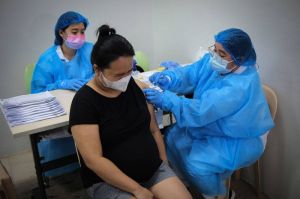 FOURTH SHOT A Makati resident gets her second booster at the Cembo Health Center on Monday, April 25, 2022, as the Department of Health rolled out the program in Metro Manila.  Only immunocompromised individuals will initially be given second boosters. PHOTO BY J. GERARD SEGUIA

PRESIDENTIAL Adviser for Entrepreneurship Jose Maria “Joey” Concepcion 3rd warned that sliding back to Alert Level 3 will be disastrous to the economy.

He issued the warning as experts appealed to authorities to consider rolling out a new round of booster shots as a proactive measure against the projected surge in infections in May.

Speaking before an online town hall meeting on Monday, Dr. Ranjit Rye, head of OCTA Research, said “numbers will rise” by next month that could trigger the enforcement of restrictive measures and disrupt the momentum of economic recovery.

Concepcion said that the country is already burdened by the economic impact caused by the Russia-Ukraine crisis and further hits could be experienced if recovery momentum is halted due to the possibility of rising Covid-19 cases. “We can’t afford two problems at the same time,” he said.

OCTA Research fellow Dr. Guido David shared Concepcion’s sentiment, pointing to what happened to South Africa, India and the United States, which have had the same pandemic trend in the past as the Philippines, and are likely predictive of what may happen in the country.

“How high and when, we don’t know yet,” Guido said. “Maybe May or June.” Filipinos whose immunity has lowered “will become more vulnerable” to the Omicron variants, just as what was experienced in South Africa and the US, but with cases which “tend to be mild” and no immediate for hospitalization.

Still, ramped up vaccination is needed as this will make a huge difference.

Health Secretary Francisco Duque 3rd said 85 percent of those who experienced severe Covid-19 were unvaccinated, while 93 percent of deaths were among those without even one shot of the vaccine.

Dr. Ted Herbosa of the government’s Vaccine Expert Panel, on the other hand, warned that an outbreak is likely among the unvaccinated.

“If we ever do get an outbreak, it will be in areas where vaccination rates are below 50 percent,” he said, noting that although 74.67 percent (or 67,209,612 million) of the country’s target population have been fully vaccinated, only 12.9 million have been administered booster shots.

Concepcion pointed to the public’s complacency as the main reason behind the low turnout of citizens getting their third or fourth jabs.

“Early in the pandemic, it was not very hard to get people vaccinated. This sense of complacency can cause us harm. I think it’s important that we maintain this wall of immunity. We don’t want to break this momentum,” the adviser lamented.

“The way forward is vaccinations and boosters. There are drivers for the increase in infections, but it will not be a concern if we are boostered. We can participate in the elections, we can enjoy these things for longer when the economy is open,” Concepcion said.