RE key to energy security 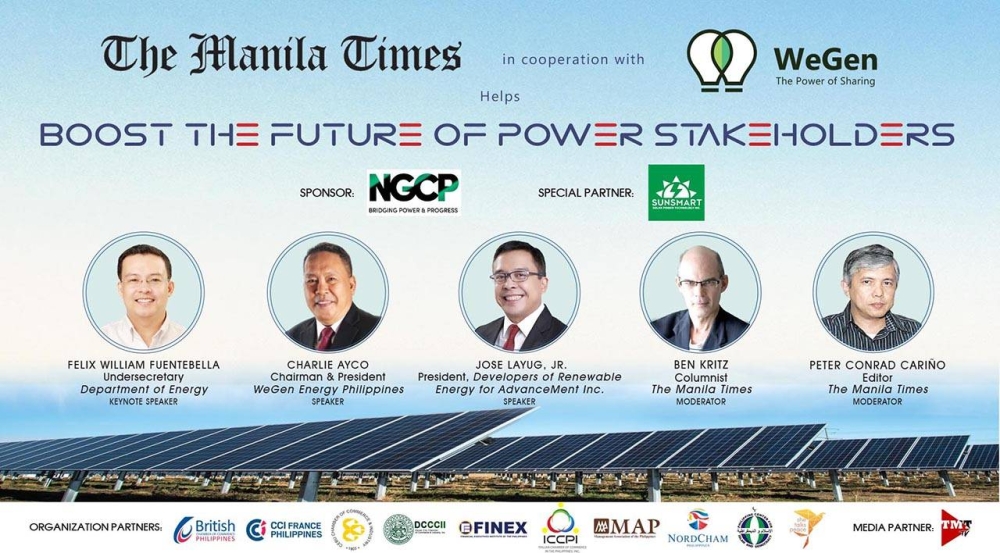 TOMORROW (Friday, April 29), the Manila Times will present another in our series of online forums, this one entitled, “Boost the Power of Future Stakeholders.” The forum will focus on developments and opportunities in renewable energy for consumers, producers, investors and the economy as a whole, and can be viewed live on the Manila Times' Facebook, YouTube and DailyMotion pages beginning at 10 a.m.

The forum comes at a particularly significant moment for the Philippines. The national election that will be held in just over a week's time is naturally consuming much of our attention, as it will almost certainly lead to big changes in many government policies, with energy being rather high on that list for a variety of reasons. At the same time, the country is, unfortunately, also entering its annual period in which electricity can be expected to be in short supply, with all the difficulties that implies even under the best of circumstances.

In addition, all of this is happening at a time when the economy, though not in dire straits by any means, is nevertheless in a bit of a delicate condition due to inflation pressures, the lingering effects of the Covid-19 pandemic, and the unavoidable uncertainty about what a change in government might bring. Finally, there is the critical need to mitigate and adapt to climate change effects, which can be expected to become progressively more immediate and severe as time passes.

With these various factors in mind, it is an interesting and welcome coincidence that the International Renewable Energy Agency (Irena) just last week released its annual report on global renewable energy (RE) for the year 2021. The report revealed several encouraging and somewhat unexpected developments.

First, of the approximately 3,783 gigawatts (GW) of electricity capacity added in 2021 worldwide, 3,064 GW, or 81 percent, was in various forms of RE, with 88 percent of that being solar and wind power. Most of the development, about 60 percent of the total, is taking place in Asia, led by China, but with significant RE expansion in India, Japan, South Korea and Indonesia as well.

The comparatively low cost and rapid development time of these forms of RE compared to conventional fossil fuel or nuclear energy makes them an attractive solution for countries that need energy quickly.

Investor interest has likewise been growing over the past few years, but 2021 seemed to represent a tipping point; the rapid growth of investment in RE projects, while investment in conventional fossil fuel generation was almost flat, is a clear signal that investors now consider RE the preferable, more productive investment.

One attractive area in which RE capacity grew was in so-called off-grid capacity, which includes microgrids and other forms of distributed generation systems (watch today's forum if you want to learn more about what those are), and various types of single-user systems powered primarily by solar, hydropower, or biofuels. Besides being cheaper and relatively less complex than larger, grid-connected systems, these offer a great deal of flexibility in countries — the Philippines being an outstanding example — where there are areas that are unattractive economically or technically too challenging to energize through more conventional means.

The incoming administration should prioritize the development of RE, as opposed to what has been done with policy up to now, which has been to pursue an arbitrary target percentage of RE in the country's energy mix. There is no real argument against taking this approach; the most common counterargument, that RE is unreliable because it depends on sun or wind and cannot supply 24-hour power, is no longer relevant. The mix of RE technologies that are readily available, along with rapid developments in energy storage systems, allow RE to be deployed as so-called baseload power, albeit in a different way than what conventional energy policy thinking imagines.

Likewise, the extreme vulnerability of the Philippines to energy shortages or high prices because the country is a net energy importer in terms of fossil fuels can quickly be reduced or even eliminated entirely by prioritizing RE development. We look forward to learning ways to achieve this from tomorrow's experts, and we certainly hope you — and those who will be determining national policy in the very near future — will join us.