UP shoots for eighth straight win 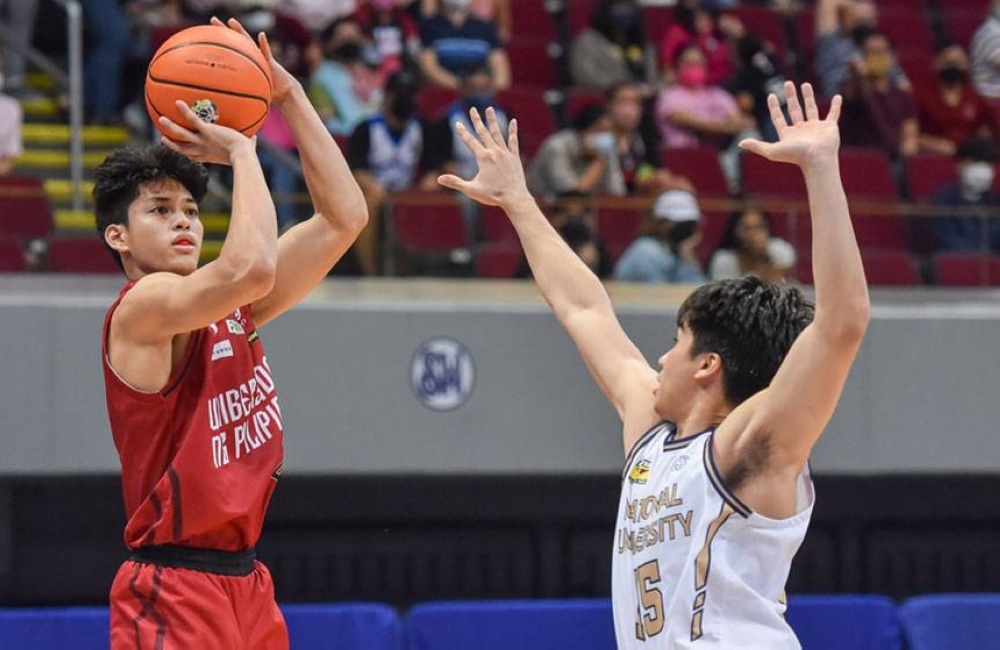 University of the Philippines’ Ricci Rivero goes for a jumper against National University’s Enzo Joson during the UAAP Season 84 men’s basketball tournament at the Mall of Asia Arena in Pasay City on Tuesday, April 12, 2022. UAAP PHOTO

Coming off a one week break in observance of the Holy Week, the Fighting Maroons (7-1) and the Tamaraws (3-5) face off at 10 a.m. as they open the curtains of the day’s quadruple-header.

UP and FEU met in the first round with the former winning the game, 83-76, last April 9. The triumph then gave the Katipunan side its sixth straight win — the State University’s longest since 2004 or during the league’s 67. The Fighting Maroons have since reset their winning run to seven games after beating National University (NU), 84-76, last April 12.

UAAP statistician Pong Ducanes said UP’s 7-game winning streak is the longest of the Fighting Maroons since they started the computerized statistics for the league back in 2003. The win also gave UP a 7-1 win-loss card this Season 84, the first time the school achieved that record since 1986.

Led by Zavier Lucero, who poured a career-high 27 points in the UP-FEU first round clash and is the No.2 MVP contender in the league, the second seed Fighting Maroons look to repeat on the Tamaraws as they aim to further boost their already good chances of making the Final Four.

“Whatever’s happening with our team right now, that’s born out of hardwork. Whatever you guys notice with our team, that’s happening because we work on it,” UP head coach Goldwin Monteverde said in the post-game presser last timeout.

“Regarding the (one week) break, I think all the players will get a chance to rest and we have a chance to prepare a little longer, we have more time to improve our game.”

Meanwhile, FEU is at the fifth spot, tied with the University of Santo Tomas. The Tamaraws entered the break with a heartbreaking 64-63 loss to Adamson University last April 12 when Matty Erolon drained the go-ahead trey for the Soaring Falcons triumph.

FEU looks to get out of the funk as the Olsen Racela-coached squad needs to rack up multiple wins to give itself a chance of making the semifinals.

After the UP-FEU game, the De La Salle University-University of Santo Tomas clash follows at 12:30 p.m. The University of the East-Ateneo de Manila University battle takes place at 4:30 p.m before the NU-Adamson University tiff caps the gameday at 7 p.m.

2022-04-19
AtinitoAdmin
Share
Previous ‘Welcome to our world’: CoMotion Festival brings deaf and disabled arts to Toronto
Next Classes suspended to give way to polls