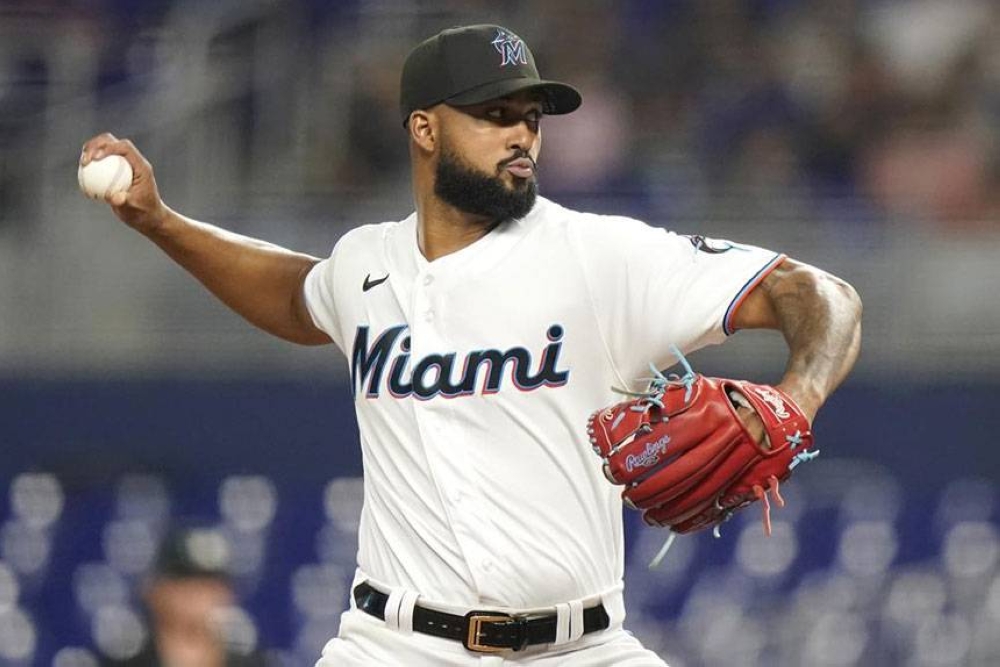 SOLID START Miami Marlins starting pitcher Sandy Alcantara throws during the third inning of a baseball game against the Washington Nationals on Monday, May 16, 2022 (May 17 in Manila), in Miami. AP PHOTO

MIAMI: Sandy Alcantara retired his last 20 batters, pitching three-hit ball over eight innings to lead Miami over the Washington Nationals 8-2 Monday (Tuesday in Manila) and give the Marlins just their fourth win in 15 games.

Jazz Chisholm Jr. and Bryan De La Cruz had three hits each, and Avisaíl García homered for the Marlins, who had 16 hits and matched their second-highest total this season.

Alcantara (3-2) needed 43 pitches to get through the first two innings and 57 for innings three through eight. Washington had three hits in the first, including Yadiel Hernández's RBI single, and had the bases loaded with one out before Maikel Franco grounded into a forceout at home and Lane Thomas struck out.

“After the first inning, I just felt a little tired, but after that, I said, 'I've got to be outside and win this game, compete pitch by pitch,” Alcantara said.

Alcantara struck out five, walked one and hit a pair of batters. Alcantara's start was moved up a day after left-hander Jesús Luzardo went on the injured list Sunday.

García's leadoff homer tied it at 1-all and started a four-run second. Erik González had a two-run single and scored on Chisholm's RBI single.

Signed to a $48 million, four-year deal as a free agent deal during the offseason, García has three homers and nine RBIs.

In Chicago, Willson Contreras led off with a double and became a rare leadoff hitter with a first-inning grand slam as the Chicago Cubs burst to an eight-run lead and beat the Pittsburgh Pirates.

Contreras became the 10th leadoff hitter since 1901 with a first-inning slam, the first since Houston's George Springer off Kansas City's Edinson Vólquez on June 24, 2016. The slam was the 100th homer of Contreras' career, making him the third Cubs catcher to reach that mark along with Gabby Hartnett and Jody Davis. Contreras became the first Cub with two extra-base hits in an inning since Javier Báez on May 1, 2019.

Wade Miley (1-0) retired his first 14 batters before Michael Chavis lined a single to left and ended a 13-inning hitless streak for Pittsburgh batters. The Pirates didn't get any hits in a 1-0 win over visiting Cincinnati on Sunday and had not gotten a hit since Rodolfo Castro's seventh-inning single during Saturday's 3-1 win.

In Baltimore, Jose Trevino became the first New York catcher with a home run this year when he hit a three-run drive in the fourth to lift the surging Yankees over the Baltimore Orioles.

The Yankees traded power-hitting catcher Gary Sánchez to Minnesota in the offseason, and both Trevino and Kyle Higashioka have improved the defense but are slugging under.300. Trevino had a couple hits Monday, though, including his big home run.