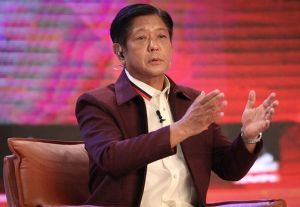 PRESIDENT-ELECT Ferdinand “Bongbong” Marcos Jr. is looking at the national budget for 2023 to fund an economic stimulus measure that will help those severely affected by the Covid-19 pandemic.

Speaking to reporters at his headquarters in Mandaluyong City on Monday, Maros admitted that most of the 2022 budget has been disbursed “but not all of it has been spent, so we still have some breathing room.”

He added that only a little was left of this year’s budget “that’s why we will have to look to the new budget, the budget for 2023, which is presently being written.”

Marcos said his administration intends to allocate funds for investment-led expenditures that will bring profits to the government.

He did not elaborate, but investment expenditures are those that stimulate the economy such as infrastructure.

He, however, was not keen on a proposal to sell some government assets in order to generate more funds to pay for the country’s growing debts.

“I’m always very wary of selling government assets. As a matter of principle, I’d rather not,” Marcos said.

House leaders led by Leyte Rep. Martin Romualdez are looking to pass a stimulus package dubbed “Bangon Bayan Muli” Bill under the 19th Congress, which will convene after June 30.

Romualdez, Marcos’ cousin, said the measure will allow the president-elect to use resource1s available during the final months of 2022 to address the country’s pandemic response and use leftover funds to stimulate the economy.

Albay First District Rep. Edcel Lagman, however, said the next administration may not have enough funds for another stimulus package as the government has already disbursed 90 percent of the P5-trillion national budget for this year.

“Unless the new administration can find or create fresh funds, the stimulus package monikered as ‘Bayan Bangon Muli’ will be mere sloganeering and simply a change in nomenclature from the original Bayanihan,” Lagman said, referring to the two stimulus packages approved by President Rodrigo Duterte during the pandemic.

Two Bayanihan laws have been passed to supplement funds for the recovery and response of the government against the Covid-19 pandemic.

At the same time, Marcos said that the Philippines needs to have higher power supply to accelerate the industrialization of crucial sectors affected by the pandemic.

He discussed with South Korean Ambassador to Manila Kim Inchul the revival of the mothballed nuclear power plant built during his late father’s administration.

“Binuhay namin muli ang diskusyon na ‘yun (We revived that discussion). Although they have come before, we will now study their recommendation, their findings and we will see if we can still apply,” he added.

Marcos noted that a power facility needs to have “at least three years of lead time” before it can be fully utilized.

“Kahit na hindi aabutan ng administrasyon ko (Even if it will not happen during my administration), we still have to start somewhere,” he said.

“Isa sa pinakamalaking problema (One of the biggest problems) is the supply of power. If we are going to industrialize post-pandemic… then the power sector must be ready for that,” he added.

The BNPP was the only nuclear power plant in the region during the 1980s as the Philippines was one of the first Southeast Asian countries to embark on a nuclear energy program.

However, the project was mothballed because of corruption allegations and safety concerns.

A study conducted by Russia State Atomic Energy Corp. in 2017 said the rehabilitation of BNPP will require from $3 billion to $4 billion.