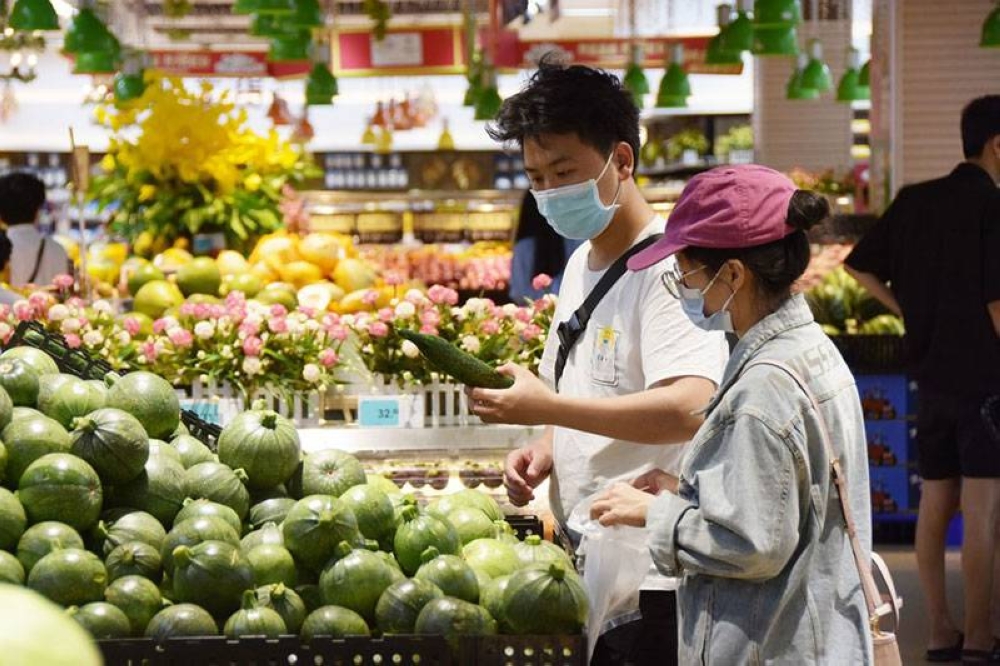 SHOP FOR CROPS This May 11, 2022 file photo shows a pair of shoppers inspecting vegetables at a supermarket in Mengzi, in China’s southwest Yunnan province. XINHUA PHOTO

BEIJING: China’s value-added industrial production increased by 4 percent in the first four months of 2022 from a year earlier while Covid-19 outbreaks dragged retail sales in the same period, the East Asian country’s National Bureau of Statistics (NBS) reported on Monday.

Data from the statistics agency showed that the latest industry output growth figure was 2.5 percentage points lower than in the first quarter. For April alone, production growth declined 2.9 percent year on year from March’s 5 percent.

For the four-month period, production in the mining sector grew at an annual pace of 10.4 percent; manufacturing, 3.2 percent, with value-added output at 11.5 percent; and electricity, heat, gas and water, 5 percent.

With efforts to contain the Omicron-fueled coronavirus outbreaks, enhance transportation and logistics, and support enterprises to tide over difficulties, industrial production will be on the mend, he added.

Industrial output is used for measuring the activity of designated large enterprises with an annual business turnover of at least 20 million yuan (about $2.95 million).

On retail sales, NBS data showed that these dipped 0.2 percent year on year to 13.81 trillion yuan (about $2 trillion) in January to April.

For the fourth month alone, retail sales declined 11.1 percent from a year ago to 2.95 trillion yuan, which Fu mainly blamed on “the short-term impact of Covid-19.”

Home sales dropped 32 percent in the first four months from a year earlier, reflecting weakness in the property sector, which was struggling even before lockdowns were imposed across China, including in its largest city Shanghai, to contain the coronavirus’ spread.

Commenting on the data, Tommy Wu of Oxford Economic said the “Shanghai lockdown and its ripple effect through China, as well as logistics delays resulting from highway controls… have severely affected domestic supply chains.”

Household consumption was “hit even harder,” he added, warning that disruptions could extend into June.

At a press conference, the NBS spokesman said sales of non-daily necessities and catering-sector revenues — which declined 22.7 percent last month — took a hit from the Covid-19 resurgence, dragging the growth of China’s overall retail sales as a result.

Despite the drop in retail sales, Lu said basic living needs were guaranteed, leading to the sales growth of relevant commodities.

Sales of beverages of major enterprises jumped 6 percent in April, while those of grain, edible oil and other food products rose 10 percent.

Fu expects consumption to gradually recover from the outbreaks’ impact and continue to stabilize the economy. He said consumption drove China’s economic growth in 2021 and the first quarter of this year.