I couldn’t help borrowing the title of that famous talent search on TV when I came to know of the varied talents of employees of Conrad Manila.

Before the pandemic set in, Ian Bencio David, Senior Sales Manager of the hotel and a talented singer, was one of the four global winners of Hilton Worldwide’s singing contest for its employees, Rockstars of Hospitality. He was thrilled to find out that among the valuable prizes he received was a reserved seat at the Grammy Awards in Los Angeles, California in January of 2020, as the representative of Hilton Worldwide and, of course, Conrad Manila. Naturally, it was a euphoric once-in-a-lifetime experience for this young man.

During the pandemic, David continued strengthening the hotel’s customer base through online and offline platforms and contributed to innovations introduced by the hotel towards producing continuous revenue.  This committed and effective strategy earned him another promotion to the position he currently holds.

Aside from being a vital cog in Conrad Manila’s Sales and Marketing Department, he continues to be the in-house program host and singer, delighting his colleagues and clients with his enviable renditions of Frank Sinatra and Michael Buble classics.

Another talented officer of the hotel is Spencer Ozo, Assistant Front Office Manager, who recently launched his solo exhibit of masterpieces, Positive/Negative at the hotel’s Gallery C.  Ozo is a self-taught artist whose passion for painting kept him busy and prolific during the lockdowns.  He works with acrylic paint and mixed media creating figurative and abstract works that depict animals and human figures against backgrounds of various moods and emotions.

Born and raised in Baguio City, Ozo’s art is greatly influenced by the varied nature and culture of the city.  He has a degree in Commerce and Marketing from St. Louis University which equipped him to work in various Tourism establishments like the Baguio Country Club, Holland America Lines, and New World Hotel prior to taking up a position at Conrad Manila.

When asked which of his masterpieces is his favorite, he chose “Self Worth,” a 24” X 36” acrylic which is prized at P35,000, because “it represents the struggles and adversities of women’s rights and how they overcome all those challenges;  it is also a reminder that all of us are important, and no one can put us down, as long as we believe in ourselves.”

For Mother’s Day, Conrad Manila’s talented chefs are bannering their culinary expertise with a wide array of delectable specialties designed to make mothers be at their happiest when dining in the hotel. Executive Sous Chef Patricia Mesina offers a flavorful ensemble at Brasserie on 3 – Ribeye Roast, Lechon Sisig con Chorizo, Paella Risotto, among many others…and moms dine free in a group of four, aside from bringing home a special gift.

The hotel offers many other ways to pamper moms – with delicious Mothers’ Day Flower Jelly Mini-Cakes at Bru’s Coffee Bar, or luxurious head-to-toe treatments at the Conrad Spa, to name a couple.

I know there are many other talented employees of the hotel but I just didn’t have the time to go around the other departments.  I do know that all of them enjoy their work because the Hilton hotels in the Philippines – Conrad Manila, Hilton Clark Sun Valley Resort, and Hilton Manila—ranked very high (number 3, in fact) among “The Best Companies To Work For in the Philippines” with a rating of 89 percent.  Hilton is also the highest-ranked hospitality company on the list.  The popular global chain provides a variety of resources and programs aimed at attracting, developing, and supporting team members at various stages of their careers to support their professional and personal growth. — Bob Zozobrado 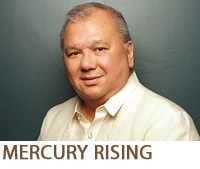 More information on Spencer Ozo’s Positive/Negative exhibit and of the hotel’s Mothers’ Day offerings may be obtained at +632 8833 9999 or conradmanila@conradhotels.com

For feedback, I’m at bobzozobrado@gmail.com

2022-05-08
Doy Santos
Share
Previous Sarah Geronimo shares inspiring message to voters
Next Filipinos in Canada weigh in on the presidential election from afar, with money and votes

Teachers urged to watch out for learners’ mental health

The bestselling books in Canada for the week ending August 17, 2022

DOT on US advisory: Measures in place for safe travel to PH