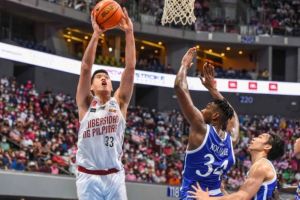 University of the Philippines’ Carl Tamayo goes for a shot against Ateneo de Manila University’s Angelo Kouame (No. 34) and Dave Ildefonso during the UAAP Season 84 men’s basketball tournament at the Mall of Asia Arena in Pasay City on May 2, 2022. UAAP PHOTO

Game One of the “Battle of Katipunan 2.0” finals series is set at 4 p.m. at the Mall of Asia Arena on Sunday.

The then Thirdy Ravena-led Blue Eagles defeated the Paul Desiderio “Atin 'To” Fighting Maroons team in the 2018 Finals, sweeping the latter, 2-0, to get the second of their three consecutive titles.

More than three years have passed since that Finals battle, Ateneo, now being led by MVP contender Ange Kouame and SJ Belangel, is still dominant just as UP, led by Carl Tamayo and Ricci Rivero, is still a contender.

The Blue Eagles finished the elimination round as the top seed with a 13-1 slate. Armed with a win-once incentive in the Final Four, Ateneo booted out fourth seed Far Eastern University, 85-72, to book its fifth straight Finals appearance last Wednesday.

The Fighting Maroons were the lone team to deal Ateneo a loss this season and end the Blue Eagles winning run in 39 games dating back to 2018, 84-83, in their second round encounter last May 1. It was a game which proved that Ateneo isn't as invincible as it looks.

Ateneo head coach Tab Baldwin didn't dwell too much on that loss, though, as for him and the Blue Eagles, the only important thing is the next game, which is in this case, Game 1 of the Finals.

“We all lost that streak. For me, no it didn't impact anything. A loss is a loss. I got plenty in my career. It was just unfortunate that we battled back and we didn't get the win. For us, the next game is the only thing that matters,” said Baldwin, whose team beat UP on the season opening day, 80-71, last March 26.

On the other hand, UP wrapped its elimination round campaign with a 12-2 card to finish as second seed also armed with a twice-to-beat advantage in the Final Four.

UP then toppled La Salle in Game 2 with a massive 22-4 fourth quarter rally to turn a 56-70 deficit into a 78-74 win. Tamayo did the heavy lifting for the Fighting Maroons in that game, tallying 19 points, 10 rebounds, four steals and three assists.

As dramatic as that Fighting Maroons triumph was, UP head coach Goldwin Monteverde now shifts his attention to Ateneo in their bid to end the dynasty of the Blue Eagles.

“Whatever happened the other day is already over, so right now we just have to review our first game today, look at the things to work on. That never left us — that we found improvement from each game we played. We're going to study Ateneo and be ready for them in the Finals.”