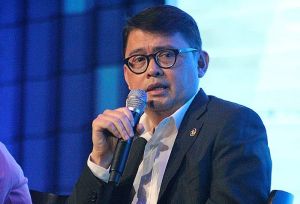 PRESIDENTIAL Adviser for Entrepreneurship Jose Maria “Joey” Concepcion 3rd is confident that the Philippine economy will return to its pre-pandemic level by the second half of this year provided that alert levels are not heightened.

During the Laging Handa public briefing, Concepcion reiterated the importance of keeping the economy open amid the pandemic.

“We are moving forward,” he said, as he agreed with pronouncements made by the Bangko Sentral ng Pilipinas in light of the unexpected first quarter gross domestic product (GDP) growth of 8.3 percent.

The country’s GDP expanded by a faster-than-expected 8.3 percent in the first quarter, a turnaround from the 3.8 percent contraction a year earlier.

The expansion was also faster than the 7.8 percent growth in the fourth quarter of 2021.

“Consumer spending is up despite inflation,” Concepcion said, as he observed that business has been surprisingly resilient despite several challenges such as the threat of new Covid-19 variants and rising commodity prices as a result of the Russia-Ukraine conflict.

The Go Negosyo founder, however, said this return to robust economic growth will further be sustained if the incoming administration of President-elect Ferdinand “Bongbong” Marcos Jr. focuses its efforts on the country’s micro, small and medium enterprises (MSMEs).

He noted that the MSMEs can no longer afford disruptions in business since they were widely hit by the lockdowns at the height of the pandemic.

“The micro and small, especially, were strapped for working capital. They live hand-to-mouth and can’t afford any disruptions in business,” Concepcion said.

In 2020, micro enterprises had the biggest share of jobs created with 29.38 percent, closely followed by small enterprises at 25.78 percent, while medium enterprises contributed 7.5 percent.

Concepcion allayed fears that the growth trajectory will be hampered by a further increase in Covid-19 infections.

“I’m not so worried at this point because we still have lots of vaccines, we just need to implement and boost more,” he said.

He cited findings of an OCTA Research Tugon ng Masa survey, which found that more than half, or 66 percent of its 2,400 respondents, will choose to wear masks even if Covid is brought under control.

“I believe masking will have to stay for some time until the virus simmers down and disappears,” Concepcion said. “It will be important for our exit strategy.”

The Cabinet official said with the elections concluded, local governments can now return their focus on vaccinations, especially that the challenge is convincing Filipinos to take their booster shots.

“That’s why we’re intensifying our Booster to the Max campaign, and reminding people that the freedoms we enjoy today are because of vaccinations,” he added.

Concepcion reiterated his appeal for the Health Technology Assessment Council to adopt guidelines by the Centers for Disease Control, which recommends second boosters for those 50 years and older.

Long Covid presents prolonged symptoms like headaches, shortness of breath and joint pains among patients who had contracted Covid.

Experts say long Covid poses a threat to productivity and may decrease quality of life for those who suffer from it.

“We have so many vaccines in stock and they will just go to waste if we don’t remove the barriers,” the Go Negosyo founder said.

“Most of those in the 50 years and older category are our economic frontliners, and although infections may be muted for now, we have to protect them from infections and from the threat of long Covid,” he added.

2022-05-25
AtinitoAdmin
Share
Previous Gov’t allots record P5.3-T budget for BBM in ’23 or 22.1% of GDP
Next What’s a derecho and why is it so destructive? The science behind this powerful storm