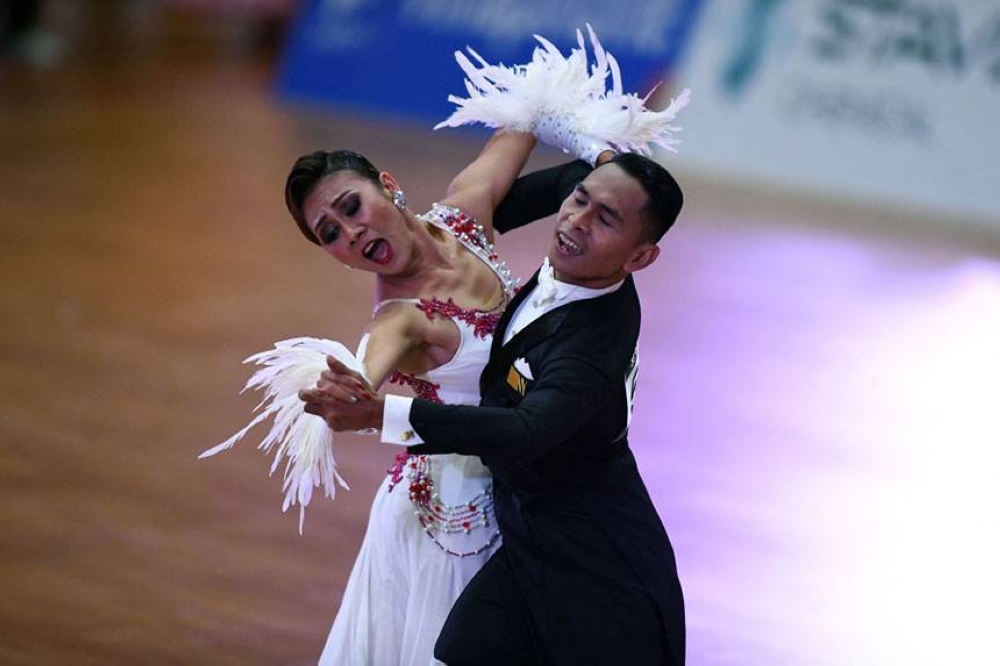 GOLDEN PERFORMANCE Mark Jayson Corales Gayon and Mary Joy Guiao Renigen of the Philippines compete in the slow foxtrot category of the dancesport event at the 31st Southeast Asian Games in Hanoi, on Monday, May 16, 2022. PHOTO BY NHAC NGUYEN/AFP

THE country's successful campaign in dancesport at the 31st Southeast Asian Games (SEAG) in Hanoi, Vietnam, has proven once again that the Filipinos are the best in the region.

After winning five golds, five silvers and two bronzes, the Philippines retained the overall title it won during the 2019 edition held at Clark Freeport Zone, Pampanga.

“They did their best because they are focused and passionate in their dancing,” Garcia told The Manila Times on Wednesday.

They triumphed in the Tango event, beating Thailand's Thanawan Yananun and Issaparung Duangkaew (silver) and Vietnam's Duc Hoa Nguyen and Yeu Nguyen Thi Hai, while in the All Five Dances, they conquered Anucha and Pasraporn (silver) and Duc Hoa and Yeu Nguyen (bronze).

“Our fighting spirits are high during the competition. We are determined to give them three gold-level performances,” the 30-year-old Nualla, a licensed chemist who is now a full-time athlete, said.

She joined the national team in 2016.

“We never stopped training even during the pandemic. We're always thinking about the SEA Games. In our own way, we made sure that we will be ready for the competition,” Nualla, who has been dancing with Sean for nine years, added.

In the Standard Waltz, Renigen and Gayon lost the gold medal to Thanawan and Issarapong while Vietnam's Duc Hoa Nguyen and Yen Nguyen Thi Hai secured the bronze medal.

“I can say that our performance as partners has gone to another level because we trust each other more. I know in my heart that my partner is more confident this time, he's the one telling me to relax because we are competing outside of the country,” the 27-year-old Renigen from Taguig City said.

She graduated from University of Makati with a physical wellness degree majoring in dance and is currently dancesport head coach of Rizal Technological University in Mandaluyong City.

Renigen and Gayon stopped dancing for two years during the pandemic and resumed only in October last year.

“Before the SEA Games, we trained in London, United Kingdom from April 14-26. We fund-raised a budget for it and by God's grace and with the help of many generous people, we were able to pursue it. We also trained in Cebu from April 30 to May 4, with Italian coach Paolo Bosco, a seven-time world champion in Standard. This training is through the generosity of Pagcor chair Andrea Domingo,” Renigen shared.

Renigen and Gayon have been dancing partners since 2014. They joined the national team in 2017.

“These are great help for us in winning these medals and of course, all the people behind us who never stopped believing and trusting us, despite all the struggles,” she added.

Coach German Enriquez is all praises for the Standard dance team, saying “the team performed very well. Better than in practice.”

He also observed that the dancers from other countries “have also improved in terms of power.”

The country's only gold medal in the Latin category was delivered by Michael Angelo Marquez and Stephanie Sabalo in the Cha-cha event.

They also finished second to Doan and Huong in the All Five Dances event, while Thailand's Lerson and Patoomsriwiroje walked away with the bronze medal.

Wilbert Aunzo and Pearl Marie Caneda won the silver medal in the Samba. Kien and Anh Pham Hong got the gold medal while Thailand's Jettapon Inthakun and Apichaya Kuptawanith took the bronze medal.

Kien and Anh beat Jettapon and Apichaya for the gold medal in Rumba while Aunzo and Caneda picked up the bronze medal.