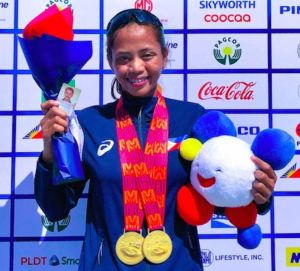 FILIPINO rowers start their medal campaign today, May 9, in the Vietnam Southeast Asian Games (SEAG) and among those praying for their success is Melcah Jen Caballero, who has retired after spending eight years in the national team.

Caballero delivered two of the country's three gold medals in rowing during the 2019 edition. She ruled the Women Single Sculls (W1X) event and the Women Double Sculls (W2X) event with Joanie Delgaco.

“I am so excited for my teammates. I saw how prepared they are. I believe that they can deliver the medals. I wish them the best of luck,” said the 26-year-old Caballero, who quit to focus on her military career, having enlisted in the Philippine Navy in 2015.