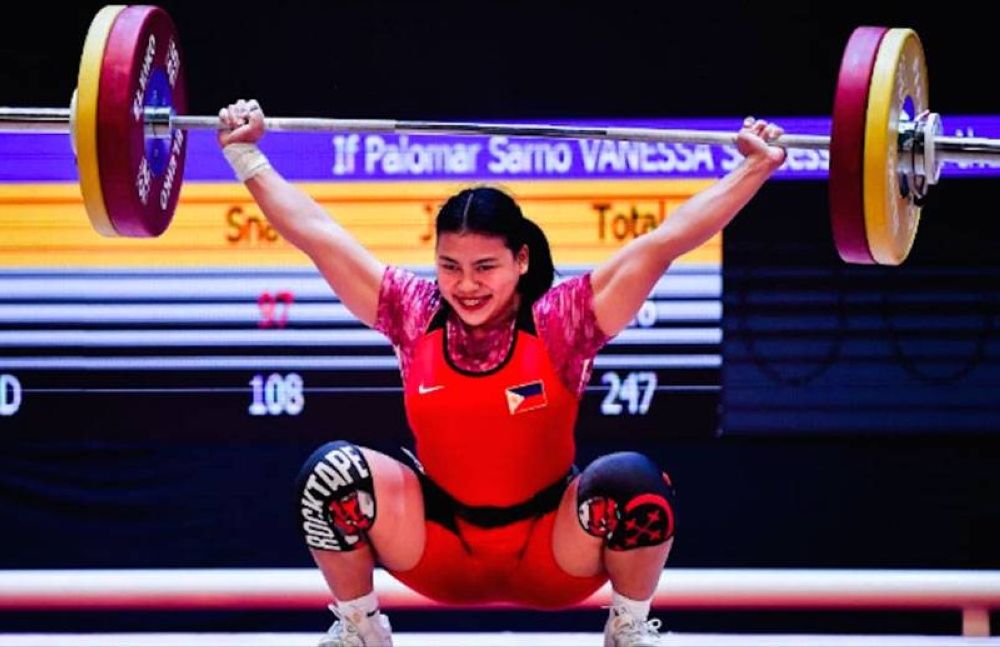 TEN years ago, a young girl from Bohol province tried lifting weights out of curiosity. She trained regularly and eventually won tournaments from the grassroots to national level. Fast forward to the present and Vanessa Sarno is considered an heir apparent to Tokyo Olympic champion Hidilyn Diaz.

Sarno made her mark at the 2022 Vietnam Southeast Asian Games with a golden performance in the women’s 71kg category where she set records in the snatch (104kg), clean and jerk (135kg) and total (239kg).

“I always keep a positive attitude everytime I compete. I try to do my best,” said the soft-spoken native of Barangay Bool in Tagbilaran City.

When asked about her record-winning feat, the 18-year-old said, “I was surprised that I did it. I trained so hard and came to Vietnam prepared. But I don’t want to be overconfident. I just focused on what I can lift, not about breaking records.”

Sarno is the second of four siblings. She used to tag along with her elder brother who was regularly lifting weights in the makeshift gym in the house of coach Nicolas Jaluag, who is married to fellow lifter Liza Danao.

From her house, Sarno had to walk 10 minutes to cross the bridge that separates Dauis town, where Jaluag’s gym is located, and Tagbilaran City.

Danao saw Sarno watching other kids train and asked her to do a deadlift.

A deadlift is a weight training exercise where a loaded barbell is lifted off the ground.

“I asked her if she wanted to do the deadlift, she learned the technique easily and she liked it so she came back to training. I became a second mom to Vanessa because her mother has entrusted her to me,” shared Danao, who started to coach after retiring as an athlete in 1992.

“That’s why I am super, super happy to finally see Vanessa compete and win the gold medal in Vietnam. It’s always coach Nic who accompanies her during competitions,” said Danao.

Sarno, an incoming grade 11 student at the Bohol Institute Technology International College, credits her success to Jaluag and Danao.

“I am very grateful to coaches Nic and Liza, they are responsible for what I am now as a lifter. I owe them so much,” said the 5-foot-4 Sarno, who became a member of the national training pool after winning the 32kg category gold medal in the 2013 Batang Pinoy National Finals in Bacolod City, Negros Occidental.

Sarno made her international debut in an invitational tournament in Indonesia. She also competed in North Korea. It was in the Asian Youth and Junior Weightlifting Championships held in April 16 to 25 last year in Tashkent, Uzbekistan, that put her in the limelight.

2022-05-31
AtinitoAdmin
Share
Previous Shanghai to start lifting 2-month COVID-19 lockdown Wednesday
Next Ronnie Hawkins: A look at the life of one of rockabilly’s most colourful characters