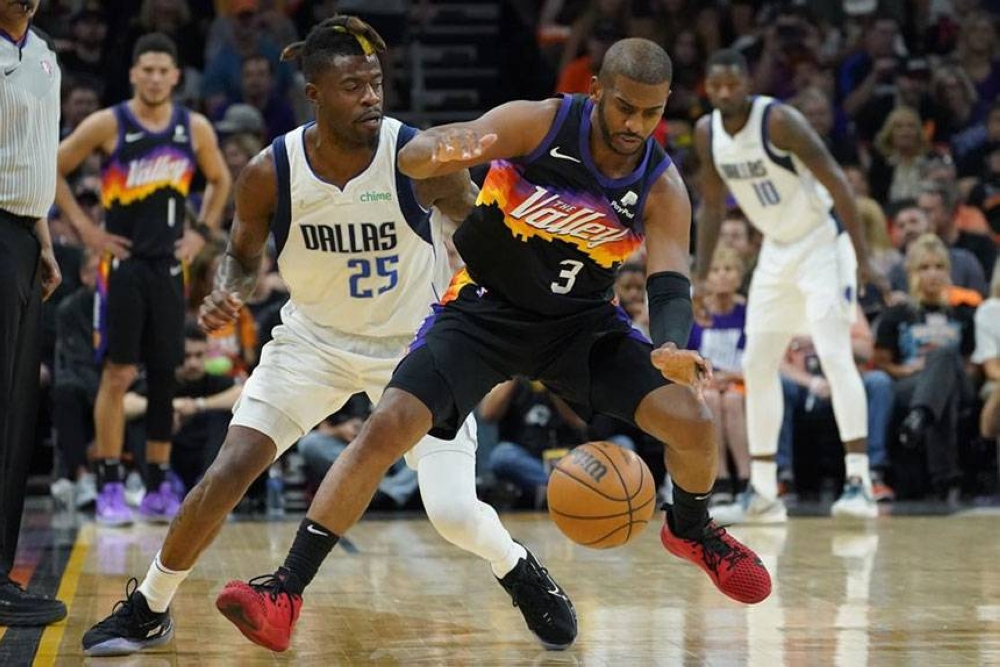 IN CONTROL Phoenix Suns guard Chris Paul (3) works the ball past Dallas Mavericks forward Reggie Bullock (25) during the first half of Game 2 in the second round of the NBA Western Conference playoff series on Wednesday, May 4, 2022, in Phoenix (May 5 in Manila). AP PHOTO

PHOENIX: Chris Paul scored 14 of his 28 points in another spectacular fourth quarter and the Phoenix Suns beat the Dallas Mavericks 129-109 on Wednesday (Thursday in Manila) to take a 2-0 lead in the Western Conference semifinals.

Paul — a 12-time All-Star who turns 37 on Friday (Saturday) — almost single-handedly turned a tight game into a comfortable victory, the Suns’ 11th win in a row against the Mavericks counting regular-season games.

The Mavs led 60-58 at halftime but the Suns quickly recaptured the lead after Devin Booker hit back-to-back 3-pointers. The Suns took an 89-83 advantage going into the final quarter and it looked like a tough fight was coming.

But that’s about the time Paul decided the game was his to control, hitting six shots in a row on everything from 3-pointers to mid-range jumpers to layups. The feisty Mavericks finally didn’t have an answer. Booker hit a pair of 3-pointers midway through the fourth to give the Suns a 114-95 lead.

Game 3 is on Friday night in Dallas.

In Miami, Bam Adebayo scored 23 points, Jimmy Butler had 22 points and 12 assists and Miami beat Philadelphia to take a 2-0 lead in the Eastern Conference semifinals.

Game 3 is Friday (Saturday) in Philadelphia, with 76ers star Joel Embiid possibly ready to play after missing the first two games because of a concussion and orbital fracture. The MVP finalist led the NBA in scoring.

Victor Oladipo scored 19 points on his 30th birthday and Tyler Herro added 18 for the Heat, the East’s No. 1 seed. Oladipo had 10 points in the fourth quarter.

Miami has taken a 2-0 lead in 18 previous series, including the first round this season against Atlanta, and won the matchup every time. The 76ers’ franchise has dropped the first two games of a matchup on 19 other occasions, never recovering to win the series.