Celtics ready to get physical vs Warriors 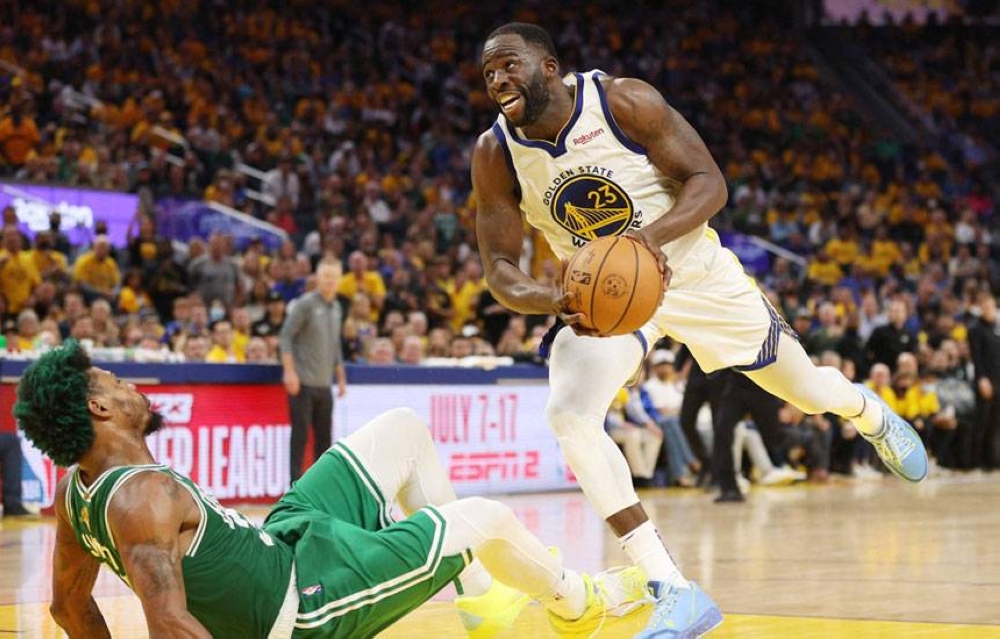 GO TO THE MATTRESSES In this file photo taken on Sunday, June 5, 2022, Draymond Green of the Golden State Warriors drives against Marcus Smart of the Boston Celtics during the third quarter in Game 2 of the 2022 NBA Finals at Chase Center in San Francisco, California. Boston Celtics coach Ime Udoka has urged his team to fight fire with fire as they prepare for the physical challenge of the Golden State Warriors in Game 3 of the NBA Finals on Thursday, June 9, 2022 (Manila time). PHOTO BY EZRA SHAW/AFP

BOSTON: Boston Celtics coach Ime Udoka has urged his team to fight fire with fire as they prepare for the physical challenge of the Golden State Warriors in Game 3 of the NBA Finals on Wednesday (Thursday in Manila).

The Warriors outmuscled the Celtics in their series-leveling Game 2 win on Sunday (Monday in Manila), with Golden State enforcer Draymond Green leading a superb defensive performance that shut down Boston's scoring threat.

Green was a thorn in the side of the Celtics lineup throughout the win, sparring both physically and verbally with Boston's players incessantly.

Udoka says he has given his players no special instructions in how to deal with Green other than to “be who you are.”

“If you want to ignore it, ignore it,” Udoka said. “If you engage, engage. Do what you do. Be who you are.

“The main thing is to continue to stay composed. With us, I don't think it's the talking as much as the physicality that they brought. We know obviously that's what Green does. Kind of bleeds over into the team.”

Udoka said if he had been suiting up in this year's finals as a player, “I would probably get a double technical immediately.”

“But that's not everybody,” Udoka said. “Do what you do. Block it out or meet physicality with physicality.”

Udoka is also only too aware of Green's importance to the Warriors as a rallying point when the team needs lifting.

“When their team is struggling, he sets the tone for them. That's one of the ways he does it. But we embrace that,” Udoka said.

“One of the best defensive teams, we like to impose our will, as well. I have to see that with the same thing.”

Celtics ace Jaylen Brown was involved in a flashpoint with Green in Game 2 after being fouled by the Warriors star on a three-point attempt. The two ended up in a shoving match after tangling on the floor, and Brown later accused Green of trying to yank his shorts down.

Brown said he planned to ignore any needling by Green in Game 3.

“We ain't got time for that. Just come out and play basketball, let everything else take care of itself,” Brown said.

“I'm going to come out, do my job. We're here to play basketball, so don't get caught up in all the antics and stuff like that.”

Warriors coach Steve Kerr, meanwhile, said he had no plans to ask Green to temper his physical approach.

“No, just let him be him,” Kerr said. “He's at his best when he's passionate and emotional.

“I thought he played a great game the other night. The play is always going to be physical in the playoffs. Being physical is part of it.

“The main thing is you have to leave the officials alone, and Draymond did a good job of that.”

2022-06-07
AtinitoAdmin
Share
Previous Donaire: I came up completely blank
Next How the Canadian Open fits into the golf war