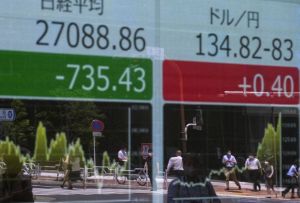 TUMBLING IN TOKYO Pedestrians are reflected on an electronic share price board showing the numbers of the Tokyo Stock Exchange (left) and a foreign-exchange board showing the yen’s rate against the dollar in Tokyo on Monday, June 13, 2022. AFP PHOTO

HONG KONG: Markets tumbled in Asia and Europe on Monday to extend a global rout while the dollar soared after a forecast-beating United States inflation print ramped up bets that the Federal Reserve (Fed) would be more aggressive in hiking interest rates.

Fresh Covid-19 outbreaks in Shanghai and Beijing have also seen authorities reimpose containment measures soon after lifting them, leading to fears about the world’s second-largest economy.

The possibility of more restrictions in China’s biggest cities weighed on oil prices, with concerns about a possible US recession and the stronger dollar adding to downward pressure on the black gold.

Investors were surprised last Friday when data showed that US consumer prices jumped 8.6 percent in May, the fastest since December 1981, as Russia’s invasion of Ukraine and China’s lockdowns pushed up energy and food prices.

The reading has led to fervent speculation that the Fed would now contemplate a 75-basis-point lift in interest rates at some point, though it is still expected to stick to a flagged half-point hike when it meets this week.

With the US central bank forced to be more aggressive, there is a concern that the US economy could be sent into a recession next year.

“For the last few weeks, there has been a cautious calm in markets — rates not pricing anything unforeseen, and equities able to make small gains,” SPI Asset Management’s Stephen Innes said.

“But the strength of (US consumer prices) completely upended that apple cart,” he added. “The market is now thinking much more about the Fed driving rates sharply higher to get on top of inflation and then having to cut back as growth drops.”

Bank of Singapore chief economist Mansoor Mohiuddin said officials were likely to lift borrowing costs by 50 basis points for the next four meetings and eventually push the overall rate to 4 percent in 2023.

Wall Street’s three main indexes tanked, with the Nasdaq taking the heaviest blow as technology firms — which are susceptible to higher rates — were battered, while European markets were also hammered.

Europe joined the retreat, with London losing more than 1 percent as data showed that the United Kingdom economy shrank for the second straight month in April. Frankfurt and Paris were also deep in the red during morning trade.

Goldman Sachs analysts said in a note: “At some point, financial conditions will tighten enough and/or growth will weaken enough such that the Fed can pause from hiking.”

“But we still seem far from that point, which suggests upside risks to bond yields, ongoing pressure on risky assets and likely broad US dollar strength for now,” they added.

The dollar continued to push higher on expectations of a sharp increase in US rates, hitting a 24-year peak of 135.19 yen while it also broke above 78 Indian rupees for the first time.

The greenback was also at multiyear highs on the euro and sterling.

“The ongoing backdrop to the yen’s fall is the growing gap between long-term interest rates in Japan and the US,” Takahide Kinouchi, executive economist at Nomura Research Institute, said in a recent commentary.

But Bank of Japan Governor Haruhiko Kuroda remained steadfast in sticking to its policies, saying last week that “monetary tightening is not at all a suitable measure” for Japan, whose economy is still recovering from the pandemic.

Questioned in parliament on Monday, Kuroda said the “recent rapid depreciation of the yen increases uncertainties and means companies face difficulties in drafting business plans, thus it is negative for the economy and not desirable.”

Oil prices sank, extending Friday’s retreat, on demand concerns as China sticks to an economically damaging zero-Covid policy to fight a fresh outbreak of the disease.

Parts of Shanghai were put back under lockdown and officials carried out mass tests on millions of people, just weeks after lifting strict measures in the country’s biggest city.

The uncertainty has also hit Bitcoin, with the cryptocurrency falling below $25,000 for the first time since the end of 2020.

Should applicants be paid for job interviews?

Applying for a job can be a job itself. At least one human resource expert …