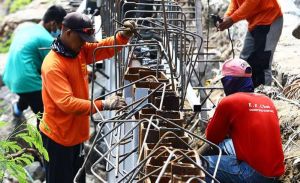 Workers are seen inside a construction site along Roxas and Macapagal Boulevards in Pasay City, on 4 June 2022. (PHOTO: MIKE ALQUINTO)

THE number of jobless Filipinos fell in April, with the unemployment rate at its lowest since the pandemic began, the Philippine Statistics Authority (PSA) reported on Friday.

National Statistician Claire Dennis Mapa said in a briefing on Friday that preliminary Labor Force Survey data put the unemployment rate in April at 5.7 percent, the lowest since January 2020, when it was 5.3 percent.

The employment rate rose to 94.3 percent, with 45.63 million people having jobs.

The data also reflected a 14.3-percent underemployment rate, easing from 17.2 percent a year ago and 15.8 percent a month earlier.

That means 6.40 million people want to work for extra hours at their existing job to add to their income, or looking for a second job or a new career with longer hours, Mapa said.

Invisible underemployment or the share of underemployed people working at least 40 hours per week was estimated to be 4.8 percent. This is lower than the 5.9 percent last January and the 4.9 percent in April of last year.

Despite the drop in the number of jobless, the National Economic and Development Authority said fewer Filipinos are working due to supply chain disruptions caused by the Russia-Ukraine conflict, as well as seasonal factors in agriculture.

The labor force participation rate plunged from 65.4 percent to 63.4 percent between March and April, resulting in a net job loss of 1.3 million people, the PSA said in a separate statement on Friday.

Agriculture accounted for 1.1 million of the 1.3 million net job losses, while services accounted for 0.5 million. The 0.3 million jobs created in the industry sector helped to offset this.

“Higher oil prices and seasonal factors have impacted workers in the transport and agriculture sectors, respectively, and hindered some from going to work,” Socioeconomic Planning Secretary Karl Kendrick Chua was quoted as saying.

“To address this, the government will urgently distribute targeted subsidies to the hardest-hit sectors to cushion higher prices,” Chua said.

While employment is 3.1 million more than pre-pandemic levels, the country cannot fully benefit from more relaxed movement restrictions without the full return of face-to-face classes, he said.

Businesses that cater to students, Chua added, remain closed or operate at a reduced capacity. One-fourth of parents are unable to work because they must support and supervise their children’s online education, limiting income generation for some families.

“The Philippine economy has recovered to its pre-pandemic gross domestic product level this year. We must now focus on accelerating our growth by strengthening our domestic economy and investing in the education and development of our children,” Chua said.